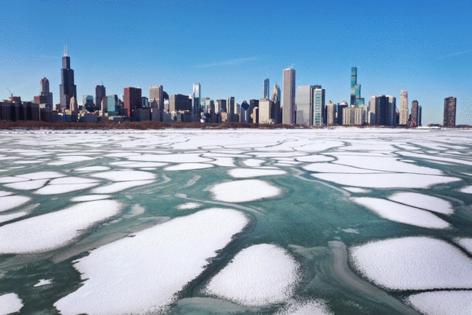 The lakes collectively are only about 3% ice-covered, and scientists are forecasting a peak ice cover of only 12.3% this winter. That would be the lowest since 12% in the winter of 2002, which was the lowest ice year on the Great Lakes since record-keeping began in 1973.

"Now we're back into a warmup after a few days of cooling. The lakes right now are wide open," said Jia Wang, ice climatologist for the National Oceanic and Atmospheric Administration's Great Lakes Environmental Research Laboratory in Ann Arbor.

The long-term average annual maximum ice cover on the Great Lakes is 55%. The northernmost Great Lake, Superior, in a typical winter averages almost 64% ice cover. Forecasters this year expect the biggest Great Lake to only achieve about 8.5% coverage.

Although ice coverage varies greatly from winter to winter — the collective Great Lakes were nearly 93% ice-covered in 2014 — the longer term trend shows less winter lake ice, as human-influenced climate change causes the Great Lakes region to warm faster than the rest of the U.S.

Among other impacts, it has the potential to harm fish habitat — species such as whitefish rely on ice cover to protect spawning beds from winter storms — and fuel more and heavier spring rains, a potential detriment to agriculture.

"February will be the coldest month of our winter," Wang said. "The lake-effect snow will come."

The conditions should also dictate extreme caution for those who typically recreate on lake ice, such as ice fishermen and snowmobilers, Wang said. He cited the 34 anglers rescued from a large, floating chunk of ice that broke off the shore of Point Comfort on Lake Michigan in Green Bay, Wisconsin, on Jan. 7.

"This year is not very safe for ice fishing," he said.