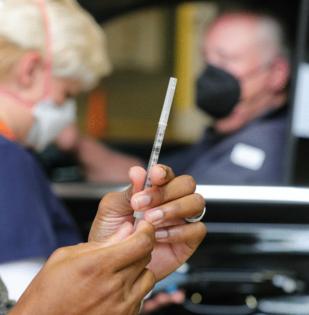 MIAMI — Although the number of newly confirmed COVID-19 cases is dropping, Miami-Dade County has now surpassed 1 million confirmed cases, reaching an undesirable milestone as the omicron variant continues to spread across Florida.

The numbers were confirmed in the Florida Department of Health’s weekly report, released Friday as the state approached 5 million cases.

Miami-Dade is the only county in the state to reach this milestone. Only one other county in the U.S. has passed 1 million cases: Los Angeles County in California, which sits at 2,040,078 cases as of Thursday’s Centers for Disease Control and Prevention Community Profile Report. Maricopa County, Arizona, and Cook County, Illinois, are also approaching the 1 million mark.

Florida reported 59,061 COVID-19 cases and three new deaths Thursday, according to Friday’s report to the CDC, based on Miami Herald calculations of CDC data.

In the past seven days, the state has added 66 deaths and 61,345 cases per day on average, according to Miami Herald calculations of CDC data. In all, Florida has recorded at least 4,992,579 confirmed COVID cases and 63,084 deaths.

Miami-Dade reported 110,441 new resident cases in the week ending Jan. 13, according to Herald calculations of the state’s weekly report. The county’s resident case total stands at 1,051,508. This is the first time the county’s toll was reported to be more than 1 million cases.

New infections fell by 15.5%, after rising by 13% the week before (Dec. 31 - Jan. 6). This is the county’s first decrease in newly reported weekly cases since mid-November.

Miami-Dade not only holds the number one spot for cases in the state, it also leads all Florida counties in terms of vaccination, as well.