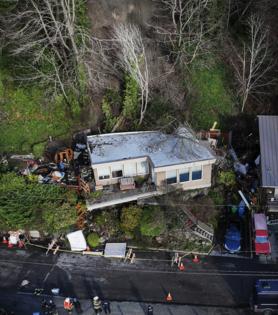 SEATTLE — Remy Olivier had gone with his neighbors daily to their Magnolia home that collapsed in a landslide last week, wading through the debris hoping to locate the body of their missing 3-year-old black Labrador mix dog.

The homeowners, James and Didi Fritts, were in their home Friday when their house slid about 15 to 20 feet off its foundation. James, who was trapped inside, was rescued while Didi was able to escape on her own.

But there’d been no sign of the missing “Sammy” until about noon Thursday, when Olivier described the three of them hearing “a little bit of whining” from the home’s crushed ground floor. It came from an area next to the partially exposed body of the dog’s sister, Lilli, who had been killed immediately when mud and debris from an adjacent hillside knocked the Perkins Lane West home off its foundation last Friday.

The Frittses immediately phoned 911, and firefighters and a rescue-extraction team were dispatched. About two and half hours later, Sammy was pulled from the wreckage, a tad dehydrated, but otherwise in fair health considering her six days trapped in the rubble.

Instead, he added: “We found her right next to her sister. So, she’s been next to the other dog this whole time.”

The body of the dead dog had been partially visible in the rubble, but left untouched due to the amount of rubble it was buried beneath. Rescue workers on Thursday had proceeded with extreme caution, worried their presence might cause the red-tagged home to further collapse.

“Our initial crews were able to hear the dog,” David Cuerpo, a spokesperson for the Seattle Fire Department at the scene, said as the rescue operation unfolded. “Right now, we’re cutting through the walls and the flooring to see whether we can locate the dog.”

The crews methodically cut through the debris with chain saws. They formed a hole in the second floor, hoping to be able to look inside and find the dog.

Cuerpo said parts of the first floor, upon which the upper level collapsed, had been reduced to “a crawl space” that further complicated extraction attempts. After about an hour, the crews ceased all chain-saw activity, fearing the noise had frightened the dog into silence.