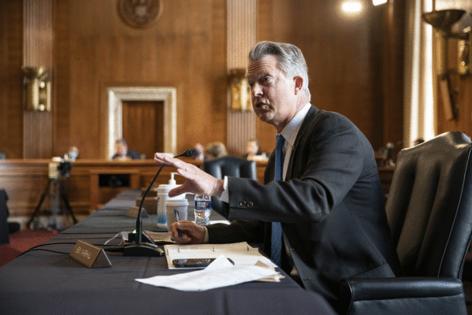 Sen. Roger Marshall, R-Kan., is planning to introduce legislation that would publicize Dr. Anthony Fauci’s salary and financial holdings after the COVID-19 pandemic leader was caught calling the lawmaker a “moron” on a hot microphone.

The conservative senator hopes the Financial Accountability for Uniquely Compensated Individuals would make it easier for Americans to find out the hefty salary and see financial disclosures of top government officials.

Fauci, who makes more than $400,000 a year as President Joe Biden’s top health adviser, correctly says the information is already public, and all that Marshall needed to do was ask.

There was no immediate word on when Marshall might introduce the bill or its prospects for success in the Democratic-controlled Congress. He has not yet released a text of the proposed legislation.

Marshall, who tweeted about his plan Friday, apparently hopes to re-up his dramatic clash with Fauci at a Senate hearing earlier this week.

“Would you be willing to submit to Congress and the public a financial disclosure that includes your past and current investments?” Marshall asked Fauci.

“I don’t understand why you’re asking me that question,” Fauci replied, noting that his financial disclosures have been public since he joined the National Institutes of Health more than 30 years ago. “You’re so misinformed. It’s extraordinary.”

Shortly after the tense exchange, Fauci’s was inadvertently caught on a live microphone saying: “What a moron, Jesus Christ!”

Fauci is the most recognized public face of the effort to fight the COVID-19 pandemic. He has become a lightning rod for conservatives over his support for vaccines and preventive measures to limit the spread of the deadly virus.

Good government groups say that Fauci is right and his records can be obtained by the public. But they say the process is onerous and should be streamlined.