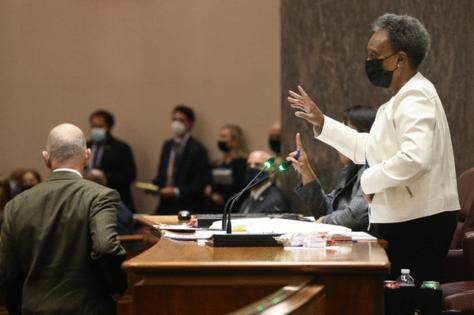 CHICAGO — An inspector general’s investigation found “a troubling series of unfounded statements” were made by Chicago Mayor Lori Lightfoot’s administration over the wrongful police raid of Anjanette Young’s home, according to the IG’s quarterly report.

Lightfoot, a mayor’s office spokesman and the head of the Civilian Office of Police Accountability all made false or misleading statements about the case, according to a summary of former Chicago Inspector General Joseph Ferguson’s report that was released Friday. Lightfoot’s office has refused to release the full 163-page report on the case.

Aldermen voted last month to settle Young’s lawsuit against the city for $2.9 million, ending a legal case that became an embarrassment for Lightfoot after her administration tried to prevent footage of the botched raid from airing.

Acting on a bad tip that a man with an illegal firearm lived in the apartment, 13 police officers raided Young’s home in February 2019, restrained her while she was getting ready for bed and forced her to stand handcuffed and naked as they searched her residence.

The situation garnered national attention in December 2020 after Lightfoot’s administration took the extraordinary step of seeking a court order to stop WBBM-TV from broadcasting video of the raid.

In their filing, city lawyers noted that Young’s attorney had asked the court to order the city to produce body camera footage in February 2020. But the lawyers objected because they believed it was “an attempt to provide the media with the body-worn camera to paint an inaccurate picture of what happened during the subject search warrant.”

A federal judge ruled that the city had to produce the video to Young’s lawyer, subject to a confidentiality order, which the lawyer violated in December 2020 by giving the video to WBBM News.

Amid the fallout, Ferguson opened an investigation. Lightfoot also commissioned law firm Jones Day to conduct its own investigation, which last month found that city officials failed to follow appropriate procedures, did not adequately communicate across departments and “did not live up to the public service mission” in their handling of the botched police raid on Young’s home.

But the firm also said it found “no evidence” of “purposeful concealment” by the mayor or any department, even though city lawyers objected to releasing video from the raid to Young’s lawyer because they were concerned it would be given to the media.

The IG report faults a deputy press secretary for misleading a WBBM reporter and takes issue with Lightfoot’s early comments about the raid.