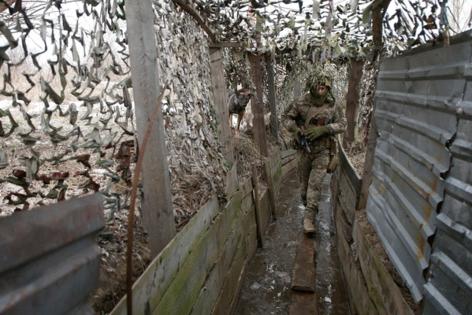 The Biden administration believes Russian actors are preparing potential sabotage operations against Russian forces and fabricating Ukrainian provocations in social media to justify an intervention and sow divisions in Ukraine, according to a U.S. official who asked not to be identified.

The Biden administration warned Russian actors are preparing potential sabotage operations against their own forces and fabricating provocations in social media to justify an invasion into Ukraine if diplomacy fails.

As part of the plan, President Vladimir Putin’s government has prepositioned operatives trained in urban warfare and in using explosives, possibly to carry out acts of sabotage against Russia’s proxy forces in or near Ukraine, administration officials said Friday.

“We do have information that indicates that Russia is already working actively to create a pretext for a potential invasion, for a move on Ukraine,” Pentagon spokesman John Kirby told reporters. “In fact, we have information that they have prepositioned a group of operatives to conduct a false flag operation.”

White House Press Secretary Jen Psaki said a Russian invasion, if it occurred, “could begin between mid-January and mid-February.”

Russia’s plan would probably be set in motion if diplomacy with the U.S., NATO and key European nations fail to achieve Moscow’s goals, according to an assessment shared by a U.S. official who asked not to be identified.

Russia has repeatedly denied it intends to invade its neighbor, and U.S. officials didn’t provide more details of the intelligence they said is behind their assessment. Kremlin spokesman Dmitry Peskov said Western media talk of Russia supposedly preparing provocations is unfounded, Tass reported.

Kirby said “there is a fidelity here to the information that we have that we believe is very credible.”

The assertion follows a cyber attack that downed a wide range of Ukrainian government websites on Friday. Seventy government agencies were hit, including the Foreign and Agriculture Ministries, according to Viktor Zhora, the deputy head of the state agency in charge of special communication and information protection.

“There was no leak of important data. The content of the websites was not damaged,” Zhora said. “We are collecting digital evidence and analyzing data to understand the full chain of this attack.”