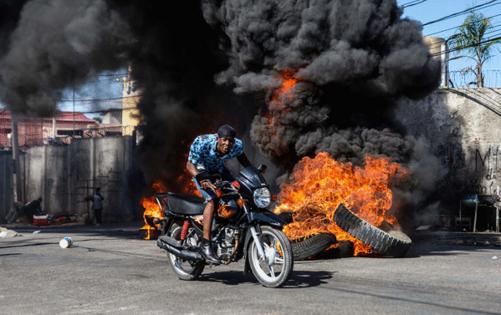 WASHINGTON — The Biden administration and the U.S. intelligence community are increasingly concerned that Haiti is approaching a dangerous flashpoint in February, when they believe that the term of assassinated President Jovenel Moïse will officially end, deepening the country’s political crisis during a simmering power struggle in Port-au-Prince.

In the days following Moïse’s assassination in July, his choice for the country’s next prime minister, Ariel Henry, took over running the country in his place. But international powers believe the slain president’s term formally ends on Feb. 7 — a date that could provide Henry’s adversaries with a pretext to challenge his fragile authority.

U.S. officials fear that gangs increasingly coalescing power since Moïse’s death, destabilizing the country with fuel and hostage crises last fall, could align with different factions in the event of a challenge to Henry, raising the specter of political violence.

“How the government of Haiti moves forward after February 7, the official end of assassinated President Jovenel Moïse’s term, will be an important inflection point for Ariel Henry’s government and its ability to bring some measure of political stability to Haiti,” a U.S. intelligence official told McClatchy.

It is the latest chapter in a long-running state of emergency in Haiti that has repeatedly demanded the attention of the Biden administration.

The country is already near total security and economic collapse, having in the past year endured Moïse’s assassination, a deadly earthquake, the gang-aggravated fuel crisis, a migration surge to the U.S. southern border and a mass kidnapping of American missionaries. All of this occurred on top of the pervasive governmental corruption that discourages any new investment.

Washington’s handling of these crises has left the Biden administration open to criticism. At home, some members of Congress want to see U.S. support for a regime change in Haiti, while Haitian-American voters and immigration advocates on the other hand accuse the United States of not doing enough to help the Caribbean nation.

In Haiti, some accuse the United States and other international actors of being too involved in the country’s domestic affairs. Others are seeking support and security assistance for a pathway to elections and a return to constitutional order.

Any unraveling of Haiti will have huge ramifications not just for the United States — located just 900 miles away from Hispaniola — but for the region as well. Since mid-September, more than 17,000 Haitians have been deported back home from from the United States and other countries in Latin America and the Caribbean, according to the International Organization for Migration, which receives returnees.

While most of the U.S. deportees are Haitians who had lived in South America and then illegally crossed the southern border with Mexico, South Florida is now starting to see its share of new refugees, deepening fears that the more unstable Haiti becomes the deeper its migration problem will become.