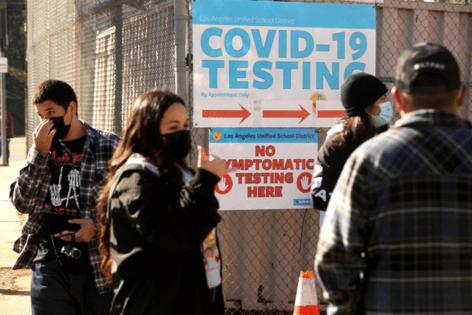 The most familiar indicator of COVID-19’s inexorable nationwide spread — daily state and local case counts — may be on the way out.

Instead, public health officials are considering a shift from increasingly inaccurate case data to numbers they say better represent the effect of the disease on the community and the health care system: COVID-19 hospitalizations and deaths.

Omicron case counts are shattering all previous COVID-19 records. But the numbers don’t carry the same weight they used to. State and local health departments are preparing to explain that to the public and start reporting more meaningful data on the virus.

“The goal of public health data is to provide information to people so they can take actions to keep themselves safer and healthier,” said Meredith Allen, vice president for health security at the Association of State and Territorial Health Officials. “We’re getting to a point where a daily case count isn’t giving people that information.”

So far, Tennessee is the only state to scale back its COVID-19 case reporting since omicron hit. But experts expect other states to follow once the omicron surge subsides.

In addition, New York Democratic Gov. Kathy Hochul last week asked hospitals to start providing more meaningful COVID-19 data by specifying whether patients were admitted because of COVID-19 or entered the hospital for unrelated reasons and incidentally tested positive for the virus.

For now, daily case counts remain the primary gauge of omicron’s nationwide spread. But epidemiologists caution that the numbers should be relied on only as broad indicators of the velocity and direction of the disease’s transmission.

Because of testing shortages, unreported home tests and a high percentage of asymptomatic infections going undetected, daily case counts are vastly underreported, said Janet Hamilton, executive director at the Council of State and Territorial Epidemiologists. The true number of infections is some multiple of the reported cases, she said.

This week, the average daily reported case count was 781,000, more than three times the daily count of 250,000 at the peak of the delta surge a year ago. On Jan. 3, more than a million omicron cases were recorded.

But that doesn’t mean hospitalizations and deaths, which lag new cases by several weeks, will rise in equal proportion. Early data indicates that omicron infections are producing milder symptoms and fewer deaths than previous COVID-19 variants.