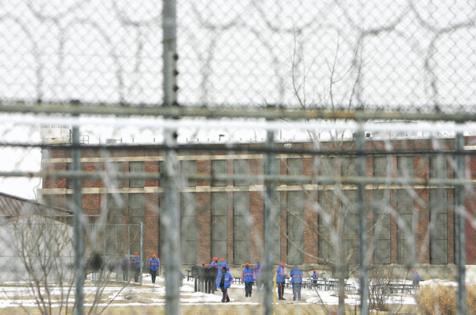 DETROIT — Michigan has accumulated the second-highest rate of infections among the nation's state prison systems during the pandemic.

The state's COVID-19 case rate inside its prisons as of Wednesday is 893 per 1,000 inmates, nearly nine times higher than the infection rate for other Michigan residents, according to data compiled by the COVID Prison Project. It reflects confirmed positive cases among inmates and staff since COVID-19 hit the state in March 2020.

As a result, of the state's 28 prisons, 11 are on full quarantine status, meaning there's a pause on programming, in-person visitation and mingling. Another dozen facilities have at least one housing unit on quarantine, and inmates in those units can't leave except for exercise and eating, separate from other inmates. The entire housing unit must move together from the cell to the yard or to the food court within capacity limits, said Chris Gautz, spokesman for the Michigan Department of Corrections.

"Every housing unit moves together and tests together, so when we saw positive cases stem from different portions of the jail, that's when the director can direct testing for everyone in that facility," he said.

"We're one of the only industries in the state aside from hospitals that are now requiring double masking by everyone, inmates and officers. Any outside contractors need a COVID test before entering facilities."

COVID-19 has especially raged through Michigan's prisons in the two weeks since Christmas, and sequencing found the highly contagious omicron variant at the Women's Huron Valley facility and Charles E. Egeler Reception and Guidance Center in Jackson.

On Dec. 1, the Michigan Department of Corrections said there were 336 cases among its population. By Dec. 29, case counts rose to 497 cases and then jumped to 1,556 by Monday.

Gautz said the nearly 5% infection rate among inmates is the highest it has been in more than a year, but well below the thousands of prisoners that were infected in fall 2020.

"We suspected an omicron outbreak at two of our prisons because of a spike in cases after only having 100 or so cases (prior to the winter). Then it jumped at Christmas," he said. "At the time, we could only assume omicron. Numbers were so unlike what we've seen for a while."

The prison system has had more than 29,500 cases among inmates and 6,473 among staff, as well as 151 inmate deaths and 11 staff deaths since the pandemic reached Michigan nearly two years ago.