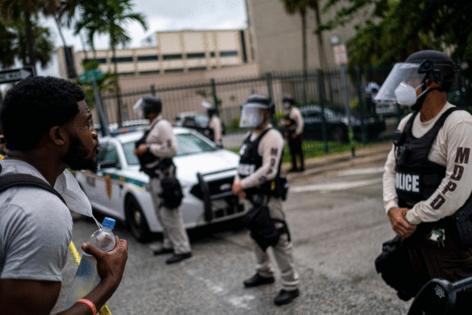 MIAMI — Of the 33 law enforcement officers in South Florida who lost their lives in the line of duty over the past two years, three were killed by gunfire, one died in a car crash and another lost his life to a work-related injury.

The deadly virus didn’t discriminate. It attacked law enforcement agencies from Miami to West Palm Beach. It killed corrections officers and federal Customs and Border Patrol agents. It took the life of a U.S. Alcohol, Tobacco, Firearms and Explosives officer in West Palm Beach. Statewide, there were at least 53 deaths in the ranks — with Florida accounting for more than 10% of all COVID-19 law enforcement deaths across the country, according to statistics compiled by a website that tracks policing fatalities.

“It is the number one killer of police, hands down,” said Chuck Wexler, executive director of the Washington D.C.- based national policy group Police Executive Research Forum. “More cops will die of COVID than will be shot, stabbed or die in traffic accidents. And it’s an equal opportunity killer.”

Most victims were in their 40s and 50s. The majority of the deaths were white and Hispanic males. The Miami-Dade Department of Corrections suffered the most, losing seven officers. The Palm Beach County Sheriff’s Office lost 5. Three Miami-Dade Corrections officers died over a six-day period just two months ago. Three Customs and Border Protection officers at Miami International Airport died of COVID-related illnesses within 15 days of each other.

Since the start of the pandemic, the Broward County Sheriff’s Office has lost three police and corrections officers to the disease. Two Fort Lauderdale and two West Palm Beach cops have died. And a Florida Highway Patrol trooper from West Palm Beach with a four-month old daughter, also was a pandemic victim.

COVID-19 is now far and away the leading cause of death for on-duty law enforcement officers across the country, according to statistics compiled by the Officer Down Memorial Page, a nonprofit online publication that gathers information from agencies across the nation. Still, its numbers likely don’t reflect the full impact of COVID-19 on law enforcement.

For this story, for instance, the Miami Herald combined statistics from the Officer Down page with local announcements and media stories to gather a more complete regional picture. Several deaths in Miami-Dade Corrections weren’t listed on Officer Down, which suggests the site may be missing other victims as well both in Florida and across the country.

It’s also difficult to compare law enforcement losses to other fields that interact daily with the public like health care providers, because those numbers aren’t widely available. But law enforcement agencies agree the toll was significant by any measure — and not just by the number of deaths.