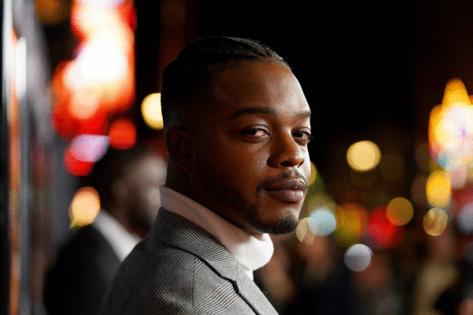 "National Champions" is thoughtful, involving, as current as can be — and oddly named. The college football national championship likely hangs in the balance, but the film is barely about that. Apart from highlights and coaches watching tape, there isn't a snap of football.

Rather, it's about a superstar player's threat to sit out the title game in an attempt to force the NCAA to pay its student-athletes. The film examines the issues and is driven by human dynamics as everyone tries to get what they want. An intelligent script by Adam Mervis shows off a more-than-surface understanding of football, the business of the game and the media. And it deploys an outstanding ensemble of well-known actors. The leads are strong: Stephan James as quarterback LeMarcus James, who is likely risking a $100 million NFL career with his stance; and J.K. Simmons as legendary coach James Lazor, who claims to deeply care for his players — LeMarcus in particular — but could see his long-awaited chance at championship immortality slip away.

Despite the NCAA's recent policy change allowing players to profit off their names and likenesses, "National Champions" is still relevant. That rule could mean big paydays for well-known athletes — Heisman contenders, stars at big schools, etc. — but means next to nothing for rank-and-file players. The demand in the film is for compensation across the board for NCAA athletes (though one imagines there would be considerable nuance in how such a thing would play out, unless they don't mind ending schools' participation in sports that aren't moneymakers). The film points out that football players earn millions for their schools and billions for the NCAA while sustaining injuries that can be lifelong, they don't receive wages beyond scholarship, room and board, etc., and schools don't cover their health care after college.

There's plenty of fodder for debate. Since the film keeps its feet firmly in reality, one can be sure this thorny issue won't be resolved by the time the credits roll. So the dramatic questions become: Is there a compromise possible or will someone blink first? And how far will the parties go to win?

It's a pleasure to watch the characters tighten as the screws turn. There are principled people on multiple sides, and a few ruthless ones to whom the stakes are crystal clear. When, for instance, David Koechner pops up in a jolly but fairly subdued role, you anticipate with relish when he'll crack (he does not disappoint). Tim Blake Nelson manages both country enthusiasm and sidewinder menace as a powerful booster with layers. Timothy Olyphant, with a groomed white beard and scarf, is so perfectly cast as the philosophy professor/ladies' man, he looks as if he just sauntered out of a faculty mixer with someone's wife's phone number. Uzo Aduba gets the meatiest of the supporting roles as the Smartest Person in the Room, a fixer-lawyer who has insight into everyone's point of view. The casting by Mary Vernieu and Michelle Wade Byrd is unerring.

Simmons' introduction as Coach Lazor sparks a moment of worry that this portrayal will be too scrubbed; the expert actor dispels that as the story moves along. Lazor is a reasonable man — no Bobby Knights or other such outsize personalities here — though he is looking down the barrel of his legacy. One wishes the film granted more time to those hinge scenes in which he must weigh his desperation against his relationships with LeMarcus and with his neglected wife (played by Kristin Chenoweth); what's necessary is conveyed, but there had to be much more to feel there.

James, though subdued for much of the film, convinces as a determined young man who can't help but draw comparisons to another recent star quarterback who faced losing his athletic career for standing up (or kneeling) for his beliefs (Colin Kaepernick is name-checked in the film). James really shines when he's arguing the case to other players — there's not just fire there, but nuance and intelligence. It's not hard to see how they could be swayed.

Ric Roman Waugh's ("Greenland," "Angel Has Fallen") direction sometimes feels as if it's trying to convince us this is a thriller rather than a thoughtful drama, but the story moves well enough. You don't have to be into football to appreciate the high-stakes struggle in "National Champions."

MPAA rating: (R for language throughout and sexual references)