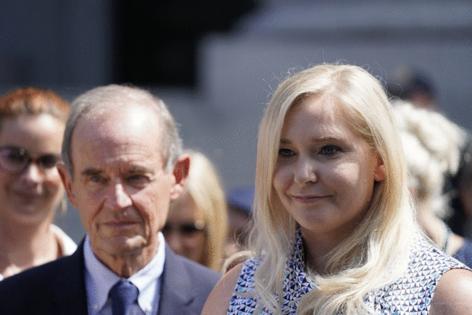 Virginia Roberts Giuffre — who has previously cast Maxwell as a central player in Jeffrey Epstein’s sex trafficking operation — apparently isn’t going to testify, even though she has been mentioned by witnesses and prosecutors almost daily during the trial: as a minor who visited Epstein’s homes multiple times; as a girl who had sex with Epstein; as a victim who was allegedly recruited by Maxwell; and as a teenager who flew on Epstein’s private plane, often with Maxwell — 32 times.

Her absence in the room is striking, considering that there is physical evidence that appears to support her story of sexual abuse: photographs of her with Maxwell and Prince Andrew and of her at Epstein’s ranch in New Mexico, pictures of her with Epstein and Maxwell at a birthday party aboard a yacht where she looks barely out of childhood.

For years, Giuffre has been at the forefront of the case, speaking out against how the government has failed to hold Epstein — and those who assisted and enabled him — accountable.

Giuffre’s lawyer is as mystified as anyone else as to why federal prosecutors have selected a narrow set of women to testify.

“The government is not telling us what they are doing,’’ said Giuffre’s attorney, David Boies. “They haven’t, at least not yet, asked her to come from Australia, so it doesn’t look like she is going to testify. As you know, they are only bringing charges with women who were under the age of consent at the time. You will have to ask them why they did that.”

Sarah Kellen not called to testify

Another prominent person mentioned in court who has not been called to testify or has not been charged is Sarah Kellen — identified by several witnesses as someone who helped Epstein schedule the “massages” that were used as a ruse to sexually exploit and abuse young victims. Kellen, who has denied she was involved, nevertheless has been mentioned repeatedly during trial.

One victim, who uses the name “Carolyn,” told the jury on Tuesday that Kellen paid her $500 to take a naked photograph of her when she was 14 or 15. She also said that, while Maxwell sometimes called her to arrange for her to massage Epstein, Kellen was just as involved in scheduling his massages.