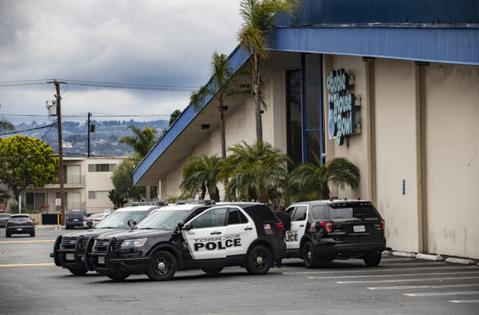 Another photo asked what someone should do if their girlfriend was having an affair with a Black man. The answer, according to the caption, was to break “a tail light on his car so the police will stop him and shoot him.”

Someone else sent a picture of a candy cane, a Christmas tree ornament, a star for the top of the tree and an “enslaved person.”

“Which one doesn’t belong?” the caption asked.

“You don’t hang the star,” someone wrote back.

The comments represent a sliver of a trove of racist text messages exchanged by more than a dozen current and former Torrance police officers and recruits.

Through interviews with sources with direct knowledge of the investigation, public records requests and a review of district attorney’s office records, the Los Angeles Times examined some of the contents of the until-now secret texts and identified a dozen Torrance police officers under investigation for exchanging them.

The broad scope of the racist text conversations, which prosecutors said went on for years, has created a crisis for the Torrance Police Department and could jeopardize hundreds of criminal cases in which the officers either testified or made arrests. California Attorney General Rob Bonta said Wednesday his office will investigate the department in the wake of the scandal.

The officers’ comments spared no color or creed: They joked about “gassing” Jewish people, assaulting members of the LGBTQ community, using violence against suspects and lying during an investigation into a police shooting, according to district attorney’s office records reviewed by the Times.

The era of ever-cheaper clean power is over, giving a fresh jolt of uncertainty to global energy markets battered by one supply crisis after another.

Relentless price declines over the past decade made renewables the ...Read More