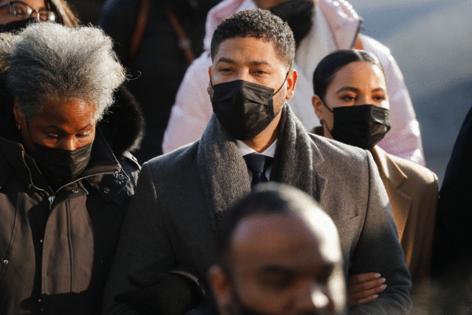 After a weeklong trial and about five hours of closing arguments, the six-man, six-woman jury began deliberating the hot-button case at about 2:45 p.m. after being instructed on the law by Judge James Linn.

Linn, who is known for keeping the trial going after hours, warned jurors previously that he would let their discussions continue as long as they need to.

Smollett, 39, faces six counts of disorderly conduct for allegedly giving false information to Chicago police about the alleged racial and homophobic attack on a frigid night in January 2019.

In his closing argument earlier Wednesday, Smollett’s attorney said the prosecution’s case was riddled with “doubts” and built on the testimony of two brothers who are criminals and “certified liars.”

“The entire prosecution case was built like a house of cards,” attorney Nenye Uche told jurors at the outset of his remarks. “And we all know what happens to a house of cards when you apply a little pressure. It crumbles.”

Uche said the brothers, Abimbola and Olabinjo Osundairo, are “sophisticated liars and criminals” who lied on the witness stand to save themselves from charges they beat up Smollett on a frigid night in downtown Chicago in January 2019.

Prosecutors have alleged Smollett actually hired the brothers to commit the fake hate crime in a bid to get media attention and pressure the "Empire" studio to take his security concerns seriously.

But Uche told the jury they can’t believe what the Osundairos say.

“You have to have your guard up with them mentally, emotionally, even spiritually,” Uche said. “They are highly intelligent, really smart, and they know how to dumb it down so you think they’re victims.”