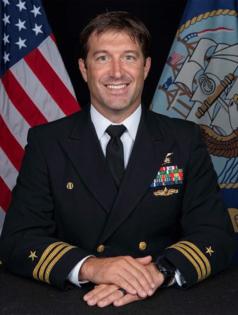 While the accident is still under investigation, initial indications are that occurred during a fast-rope training session in Virginia Beach. This training involves sliding down a rope from a helicopter. While it is quicker than rappelling, the controlled descent down rope favored by rock-climbers, it is considered to be more dangerous.

“We are working with SEAL Team 8 to provide every form of support we possibly can to Brian’s family and teammates,” said Capt. Donald G. Wetherbee, commodore, Naval Special Warfare Group 2.

“An incident like this weighs heavily on us all. Brian was as tough as they come, an outstanding leader, and a committed father, husband and friend,” Wetherbee said.

“Brian was one of our very best leaders, who possessed all the attributes that make our force effective. We will miss his charismatic leadership and faithful stewardship of our standard,” said Rear Adm. H.W. Howard III, commander, Naval Special Warfare Command.

Bourgeois graduated in 2001 from the United States Naval Academy, where he played football. The Annapolis Capital-Gazette reported that the Navy football team will honor Bourgeois during Saturday’s Army-Navy game in several ways. The team will run out with a SEAL Team 8 flag along with the traditional American, Navy and Marine Corps flags. There will be a No. 13 home blue jersey adorned with two SEAL Team 8 patches placed prominently on the Navy sideline, and two players will wear SEAL Team 8 patches on their uniforms. The patches were given to Navy wide receivers coach Mick Yokitis, a 2006 Naval Academy graduate, by Bourgeois earlier this year.

MINNEAPOLIS — Three former Minneapolis police officers who were originally scheduled to be tried in March in state court in George Floyd's death will instead be tried in June.

“The world is watching,...Read More