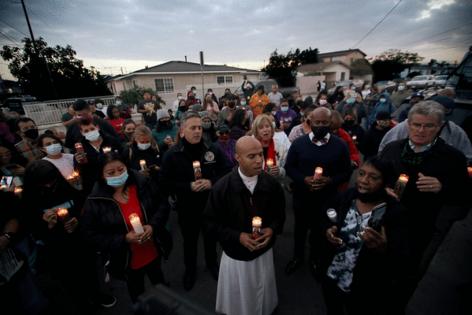 Had he made it to Christmas week, Alexander would have turned 13. Instead, the boy was shot to death outside of an elementary school in Wilmington, a port neighborhood filled with industry, working-class families and gang problems that ebb and flow like the tides.

His stepmother was injured too. A fourth grade girl also received a gunshot wound in the late-afternoon incident; she was hit by a stray bullet as she watched her brother play kickball on the playground of Wilmington Park Elementary during an after-school program called Beyond the Bell.

Law enforcement officials have not identified the woman, who is in her 30s, or the 9-year-old girl. Both were taken to nearby hospitals, where they remained Tuesday. The Los Angeles Police Department has neither apprehended suspects nor divulged a motive — though they have suggested that the sheer volume of shell casings recovered from the scene indicated a purposeful attack.

“At first I thought it was fireworks,” said Jackcel Fonseca, a classmate of the wounded girl who is also 9. Jackcel was on the playground near the girl when a bullet slammed into her little back. Teachers told the children “to run inside the cafeteria and use your Chromebook,” Jackcel said Tuesday. “I was scared, so I went on my Chromebook and watched YouTube.”

Alexander’s death compounds the horror and anger already roiling Los Angeles over a high-profile homicide in Beverly Hills on Dec. 1. And it lays bare the deep inequities that plague urban America today, as the country struggles through the second year of a global health crisis and the economy zigs and zags its way back to health.

When philanthropist Jacqueline Avant was shot to death in her Trousdale Estates home last week, former President Bill Clinton, Oprah Winfrey and Magic Johnson, among others, tweeted their condolences. Avant’s death followed a rash of smash-and-grab robberies at tony boutiques and celebrity home-invasion robberies. Those incidents received national attention and sparked an outcry over rising crime.

The reaction to Alexander’s death has been far more subdued. It was followed by another double homicide just two hours later in an equally beleaguered neighborhood about 14 miles away, according to LAPD Chief Michel Moore. Two 25-year-old men who had been living in a homeless encampment were shot to death at 7 p.m. Monday.

Mike Lansing, executive director of the Boys & Girls Clubs of the Los Angeles Harbor, said that too often, crimes committed in the neighborhoods his organization serves do not get the same outrage and attention. The group runs an after-school program at Wilmington Park Elementary.

“They get short shrift,” Lansing said.