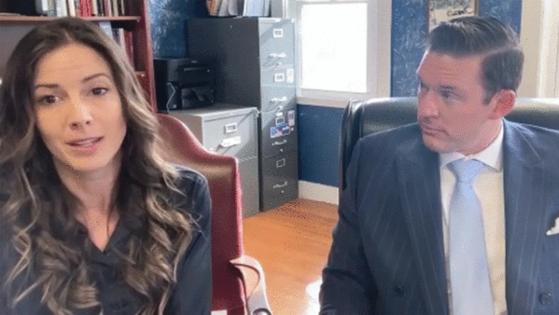 DETROIT — A northern Michigan mom who has been battling her school board over class curriculum is to stand trial on a felony eavesdropping charge, a judge ruled Tuesday after a preliminary hearing.

Chief District Judge Maria Barton of 89th District Court in Rogers City said there is probable cause to send Erin Chaskey to trial in circuit court on allegations she unlawfully recorded a private conversation between the school superintendent and a school board member.

Chaskey, 37, of Onaway, near the top of Michigan's Lower Peninsula, could face up to two years in prison if convicted.

The case arises from a skirmish in the classroom culture wars taking place across Michigan and the nation. Chaskey, a self-described conservative who had been trying to get the board to remove a high school civics teacher she believes is too liberal, told the Detroit Free Press she began recording the conversation after overhearing two school officials talking about her.

Chaskey's 15-year-old son is a sophomore at Onaway High School, though he is not a student in the class of veteran teacher Kymberli Wregglesworth. Among other complaints, Chaskey has objected to books related to systemic racism that Wregglesworth sought to include in her lessons and an alleged remark in which she told a student his "white privilege" was showing.

At Tuesday's preliminary hearing, Presque Isle County Prosecutor Kenneth Radzibon showed school security video of Chaskey arriving at a school administration office after classes had been let out on Oct. 14. Finding no secretary present, Chaskey waited for a time at the secretary's desk and then moved to the edge of a hallway to then-Onaway Area Community School Superintendent Rod Fullerton's office, where she appeared to use her iPhone to make a recording.

Both Fullerton, who has since left the district, and Michael Benson, who is vice president of the local school board, testified they believed they were having a private conversation and did not know Chaskey was outside the open office door recording them.

A school building is a public place, but "that doesn't mean you can go beyond the secretary's desk," Barton said in binding Chaskey over for trial. Before appearing to make a recording, "the defendant doesn't do anything to announce herself."

Daren Wiseley, Chaskey's Hillsdale attorney, said it was the school officials' loud conversation about her that drew Chaskey beyond the secretary's desk, and the video does not show she entered a private hallway to Fullerton's office, which was out of the range of the security camera.

"All they had to do was shut the door," Wiseley said, asking the judge to dismiss the charge.

"You can't have a reasonable expectation of privacy if you don't take a substantial step to protect that privacy."

Chaskey, whose phone was seized under a search warrant and who is free awaiting trial, is to be arraigned Dec. 20 in Presque Isle County Circuit Court.

She is also suing school officials and the sheriff's office.

David Hecker, the president of the American Federation of Teachers of Michigan, the union that represents her, earlier said Wregglesworth has the support of the school community and school officials "because she’s an impeccable educator who has given two decades of mentorship to her students and service to her community."