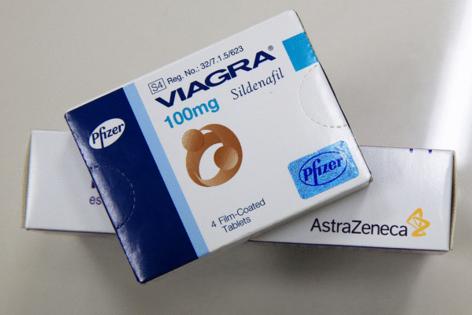 Though more studies are needed, researchers in Cleveland found that men who were taking the blue pill, also known as sildenafil, had a lower risk of Alzheimer’s, following analysis of a database of over 7.2 million patients spanning six years, BBC News reported Monday.

The team also found in lab studies that those who took higher than usual doses of the pill — best known for erectile dysfunction — displayed an increase in brain cell growth and reduced protein accumulation, according to the outlet.

“Because our findings only establish an association between sildenafil use and reduced incidence of Alzheimer’s disease, we are now planning a mechanistic trial and a phase II randomized clinical trial to test causality and confirm sildenafil’s clinical benefits for Alzheimer’s patients,” research leader Dr. Feixiong Cheng reportedly told the Nature Aging journal.

Until that research is completed, University of Edinburgh Professor Tara Spires-Jones, an expert on brain research, advises people “not rush out to start taking sildenafil as a prevention for Alzheimer’s disease.”

Dr. Jack Auty, a Medical Sciences lecturer at the University of Tasmania, similarly said this is hardly the first indication of a drug that could help with Alzheimer’s, though that has yet to pan out, according to the BBC.

To repurpose an already existing drug would be both a cheaper and overall more efficient path than developing an entirely new treatment for the disease.

Originally meant to treat the heart, Viagra’s ability to relax blood vessels and subsequently improve blood flow in other parts of the body led to its use for ED as well as pulmonary hypertension — for men and women alike — which affects the lungs, according to the outlet.

Though the exact causes of Alzheimer’s, a type of dementia, are still being probed, it’s known that those who have it have abnormal protein deposits in their brains, BBC reports.