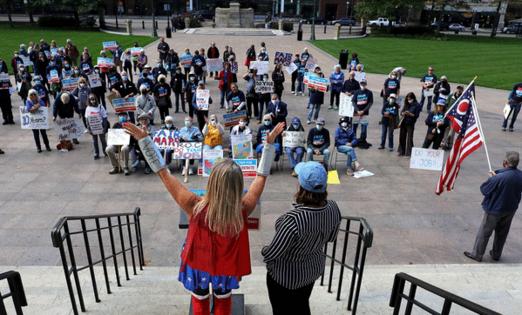 The lawsuit accuses the seven-member Ohio Redistricting Commission of drawing state House and Senate maps in a way that violates the Voting Rights Act. It also takes issue with the congressional map, passed by Republican lawmakers and signed by Gov. Mike DeWine last month.

The Rev. Kenneth L. Simon and Helen Youngblood, two Black voters from Youngstown, filed a lawsuit in federal court on behalf of a class of Black voters on Nov. 30.

They cite the 6th Congressional District as an example of "illegal and unconstitutional dilution of the Black vote." Rather than create a district that keeps Youngstown's Mahoning County with Stark, Summit or Cuyahoga counties, the new district would dilute Black voters' influence by combining it with several more-red, more-rural counties, according to the complaint.

"Because Republicans totally ignored their duties under the 15th Amendment and VRA (Voting Rights Act), Ohio ended up with a four-year redistricting map which illegally and unconstitutionally dilutes the votes of Black voters in Youngstown and throughout Ohio," according to the complaint.

Section 2 of the Voting Rights Act prohibits voting practices that discriminate on the basis of race, color or membership in a language minority group. The lawsuit also cited a 1991 federal case that found Youngstown had a history of racial discrimination.

Most of the challenges to Ohio's legislative and congressional maps have been filed with the Ohio Supreme Court, which is tasked with checking whether maps follow voter-approved rules limiting partisan gerrymandering.