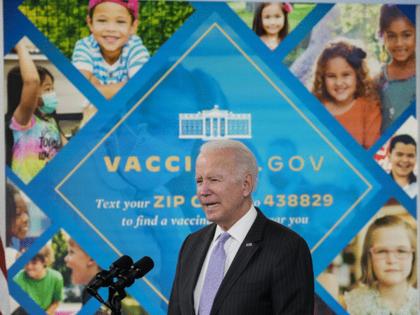 The Biden administration’s mandate for federal contractors’ employees to be vaccinated will be halted nationwide, amid a slew of challenges from states that say the president overstepped his authority in requiring the COVID-19 shots.

Led by Georgia, the seven states that challenged the mandate set to take effect on Jan. 4 are likely to succeed in their lawsuits against the administration’s order, U.S. District Court Judge R. Stan Baker of the Southern District of Georgia said in an order issued Tuesday.

The Biden administration mandate applies to roughly a quarter of the U.S. workforce and affects companies that do business with the federal government, including Lockheed Martin Corp., Microsoft Corp., Alphabet Inc.‘s Google, and General Motors Co.

Baker’s order follows a Kentucky federal judge’s grant last week of a preliminary injunction in a lawsuit involving Kentucky, Tennessee, and Ohio. Baker echoed what his Kentucky counterpart said, that blocking the mandate didn’t indicate that the vaccine wouldn’t be effective to stopping the spread of COVID-19, but rather that Biden didn’t have the power to issue such an executive order.

Representatives from Georgia universities testified during an injunction hearing earlier this month, arguing that implementation of the mandate would be expensive, onerous, and cost them valuable employees who haven’t yet presented proof of vaccination. Those schools receive millions from the federal government.

The court found that the states could likely prove that Congress didn’t clearly authorize the president to issue the mandate, and that it “goes far beyond addressing administrative and management issues in order to promote efficiency and economy in procurement and contracting.” The 2017 nominee of President Donald Trump said, instead, the executive order works as a “regulation of public health.”

The federal contractor vaccine order is part of a suite of Biden administration actions designed to increase inoculation rates. In addition to the Occupational Safety and Health Administration’s emergency shot-or-test rule for large U.S. businesses, and the shot requirement for health-care companies paid by Medicare and Medicaid, Biden mandated vaccines for the federal workforce.

“The reason that we proposed these requirements is that we know they work and we are confident in our ability, legally, to make these happen across the country,” Psaki said, noting the federal government — the nation’s largest employer — has successfully implemented such a requirement, with more than 92% of its workers now inoculated.

Idaho Gov. Brad Little cheered Tuesday’s ruling in a statement. The state is part of the Georgia-led contractor mandate challenge, as well as lawsuits against the Occupational Safety and Health Administration’s shot-or-test emergency regulation for large U.S. businesses, and another inoculation rule for health-care workers.