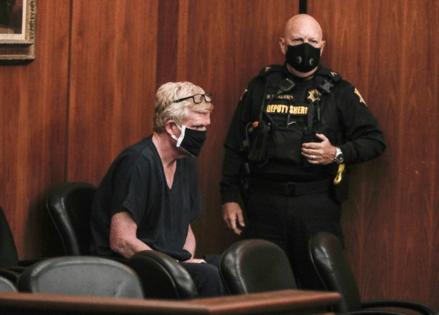 COLUMBIA, S.C. — Lawyers for Alex Murdaugh's late housekeeper have filed a lawsuit against Bank of America, alleging the bank allowed Murdaugh to set up and use a bank account to launder millions in stolen money.

Murdaugh, 53, whose law license was suspended in September and who has since been charged with numerous financial crimes, set up a bank account using the name of "Forge" to deposit ill-gotten gains, the lawsuit said. "Forge" is the name of a well-known financial consulting firm.

The lawsuit against Bank of America was filed in Hampton County, South Carolina, state court on Monday, said Eric Bland, the attorney who with Ronnie Richter represents the heirs to Gloria Satterfield's $4.3 million estate.

Bank of America officials pushed back Monday and in a statement said the allegations will not hold up in court.

"There is no basis for this lawsuit and we are asking the court to dismiss it," said Bank of America spokesman Bill Halldin.

"Make no mistake, the wrongdoer here was Mr. Murdaugh, and the diversion of these funds occurred away from Bank of America," Halldin said. "We had no knowledge of any theft and followed standard procedures in account openings for a sole proprietor business."

Bland and Richter had been negotiating with Bank of America to settle the case without a lawsuit being filed. Negotiations have not worked out, and this lawsuit is the result.

In earlier legal claims, Bland and Richter have mentioned Bank of America as the bank used by Murdaugh, but Monday's legal action was the first time the bank has been named as a defendant and as an accomplice in Murdaugh's alleged money-making schemes.

"By flexing their own rules and ignoring banking customs, Bank of America helped Murdaugh establish his fake Forge accounts, which Murdaugh funded with stolen money. ... Once he was in possession of his ill-gotten gain, Murdaugh engaged in other suspicious banking conduct (that) Bank of America should have identified," the lawsuit said.