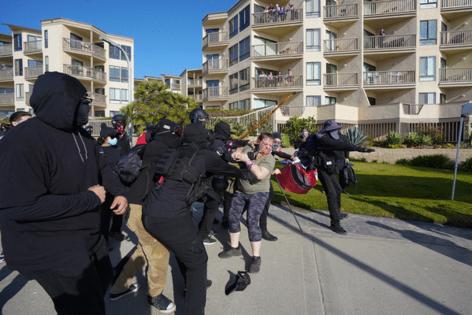 SAN DIEGO — Prosecutors on Monday charged at least seven people, whom they described as self-identified anti-fascists, in connection with eight alleged assaults that occurred in January during a Pacific Beach "Patriot March" organized by supporters of then-President Donald Trump.

Those arraigned Monday in San Diego Superior Court were among a group arrested Thursday in raids by police officers and sheriff's deputies across Southern California. Prosecutors allege the defendants "are self-identified to be affiliated with Anti-fascists or Antifa," according to a criminal complaint, and began organizing themselves — with one group originating in San Diego and the other in Los Angeles — a week before the pro-Trump rally.

The case is believed to be one of the first to use conspiracy charges — in this case conspiracy to commit riot — to target alleged members of "Antifa," a term often used to describe the anti-fascist movement.

The Center for Strategic and International Studies describes "Antifa" as a "decentralized network of far-left militants who oppose what they believe are fascist, racist, or otherwise right-wing extremists" and whose adherents "frequently blend anarchist and communist views." Anti-fascists typically don't shy away from clashes, instead using what they call "direct action" to confront the systems, groups and individuals they view as their political enemies.

According to a criminal complaint, the defendants charged Monday began their criminal conspiracy "by liking and sharing" a Jan. 2 social media post that called for a counterprotest against the pro-Trump rally, "in essence agreeing to take part in the 'direct action.' Others agreed by showing up in Pacific Beach on January 9th, 2021 and participating in the violence" detailed in the complaint, prosecutors alleged.

They're accused of using pepper spray, small flag poles, sticks and other items to attack the pro-Trump crowd Jan. 9 on the streets and boardwalk near Crystal Pier. Demonstrators at that rally held signs and flags adorned with "Stop the Steal," "Trump 2020" and other similar messages just days after the Jan. 6 insurrection at the Capitol in Washington, D.C.

Several of the attacks detailed in the complaint appear to match incidents that were recorded and shared online, such as a video of an anti-fascist counterprotester pepper spraying a dog and its owner. Prosecutors allege that act was committed by Jeremy Jonathan White, 39, one of the defendants who remained jailed Monday in lieu of $200,000 bail. White faces charges of conspiracy, assault with a deadly weapon, use of tear gas not in self-defense and animal cruelty.

A Los Angeles-based videographer captured a nearly two-minute-long attack by counterprotesters involving the use of pepper spray, a wooden folding chair thrown through the air, sticks, punches and kicks. Prosecutors detailed an identical attack in the complaint.

Also facing charges, according to a spokesperson for the District Attorney's Office, are Alexander Akridge-Jacobs, 31; Christian Martinez, 23; and Samuel Howard Ogden, 24.