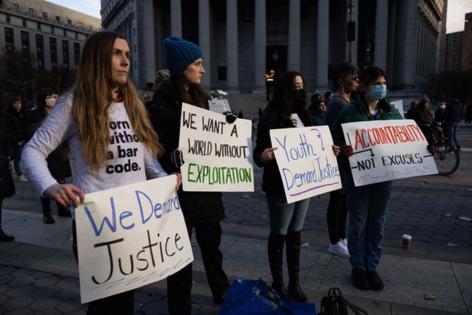 NEW YORK — FBI agents found a cache of thick black binders — all labeled with names — that contain hundreds of naked or semi-naked photographs on CDs that Epstein stored in various places inside his 40-room Manhattan townhouse.

The labels on the binders were redacted from photos shown in court because prosecutors said they were names of “third parties” who are not relevant to the sex-trafficking case they are mounting against Epstein’s ex-girlfriend, Ghislaine Maxwell, in a New York City courtroom.

Never-before-seen photographs taken by the FBI during a search following the financier’s July 6, 2019, arrest show several areas of Epstein’s gilded eight-story mansion, including the massage room where he allegedly sexually abused girls and young women.

A large safe containing more binders of CDs, cash, computer hard drives, diamonds and passports — was found. FBI agents left the house to obtain a warrant for the safe, but when they returned four days later everything from the safe was gone.

One of Epstein’s lawyers, Richard Kahn, later returned the items in two suitcases, according to FBI special agent Kelly Maguire, who supervised the raid. Maguire, a member of the FBI’s Child Exploitation and Human Trafficking Task Force, told the jury that agents searched overnight, into the next day before finding the safe buried in a closet in a third-floor dressing room.

They also found a drawer full of computer hard drives in a ground-floor office. Curiously, she noted that the hard drives they found were already marked with FBI evidence tape — indicating perhaps that they had already been used as evidence in another case.

In 2005, police in Florida raided Epstein’s Palm Beach, Florida, home after several girls from a local high school reported that they were molested by Epstein. Police, however, found that the hard drives for his computers had been hastily removed prior to their arrival — suggesting he had been tipped off about the search. The FBI later learned that the drives were removed by one of Epstein’s assistants, and it’s never been clear whether the agency ever obtained or reviewed them.

Maguire told the jury that the drives were analyzed but she did not testify as to what, if anything, was found on them.

She did, however, look at some of the CDs in the binders at the top of a closet, all neatly lined up in a row. Inside were thumbnail photos of the actual photographs contained in plastic sleeves in the binders.

The jury was then excused for the day, and the defense and prosecution argued about which of the photographs would be shown to the jury. Some of them purportedly show Epstein and Maxwell together; at least two of them are semi-naked images of subjects that prosecutors said were victims.