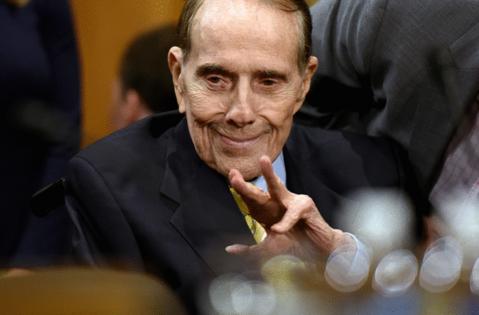 KANSAS CITY, Mo. — Bob Dole, a son of the Kansas Dust Bowl who survived a crippling barrage of Nazi fire on an Italian hillside to lead his party in the U.S. Senate, but who fell short of his highest ambition, the presidency, died Sunday.

Proud, uncommonly driven and possessed of a dark, self-effacing wit, Dole went to Washington a rock-hard Great Plains conservative but evolved into a pragmatic master of legislative compromise. He voted against Medicare as a young House member in the 1960s but worked with Democratic Sen. George McGovern a decade later to protect food stamps. He was a driving force behind the 1990 Americans with Disabilities Act, which required businesses and institutions to be more accessible to the disabled.

After politics, his elder statesman persona and comedic sense made him a celebrity. He joined former President Bill Clinton in regular face-offs on “60 Minutes,” became a spokesman for Viagra and appeared with Britney Spears in a Pepsi ad.

The Elizabeth Dole Foundation announced Dole’s death on Sunday, saying in a statement he died “early this morning in his sleep.”

Dole died after a battle with lung cancer. He announced in February that he been diagnosed with stage four cancer.

Dole entered public service in 1950 at age 27 and in 18 years rose from the Kansas House of Representatives, Russell County attorney and the U.S. House to the Senate. In 1976, he joined the GOP ticket as a vice presidential candidate, then ran twice unsuccessfully for the Republican presidential nomination.

Finally, in his 18th campaign in 1996, at age 73, Dole became his party’s presidential nominee.

“The White House or home,” he said that spring when he surprised the nation by stepping down from a job he loved, Senate majority leader.

Anyone who thought home meant Russell, Kansas, did not know Dole. Washington was home for him and his wife former transportation and labor secretary Elizabeth Dole, where they were a quintessential power couple.