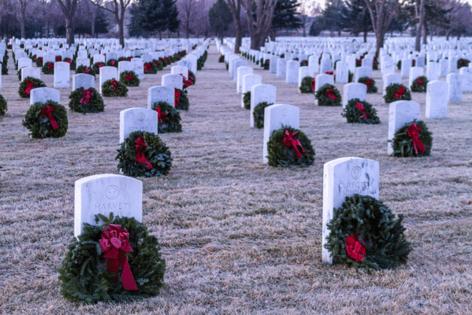 Complaints about the popular Wreaths Across America Day, when fresh evergreen wreaths are placed at gravesites of military veterans at national and local cemeteries, are climbing in the weeks leading up to this year’s event, says the founder of a civil rights advocacy organization that’s protesting the practice.

“We have no problem if people reach out and want a wreath on their deceased veterans’ graves, but to put them everywhere, to blanket them without permission of the surviving families is unconstitutional, an atrocity and a disgrace,” said Mikey Weinstein, founder of the Military Religious Freedom Foundation.

The crucifix is at the crux of the opposition.

Weinstein, who is Jewish, and his supporters — who include Jews, Muslims, Buddhists, Sikhs, the Jedi Church as well as Christians — believe the wreath pays homage to Christianity.

“This should be an aspect of respect,” Weinstein said. “It’s almost like a fundamentalist Christian gang sign to put a symbol of the Christian season of Christmas on any grave.”

Amber Caron, spokeswoman for the Maine-headquartered Wreaths Across America, said the wreaths, each hand made of 10 boughs of balsam tied with a red velveteen bow, are veterans’ wreaths, not Christmas wreaths.

“We are not ‘decorating graves’ but honoring American heroes,” she said.

The idea of placing wreaths on deceased military members’ graves began informally at Arlington National Cemetery in December 1992, when a family who owns a wreath-making business in Maine donated their leftover stock to the Army-run cemetery in Virginia.

Since becoming a nonprofit in 2007, Wreaths Across America has expanded to 3,100 burial sites including 145 of 154 National Cemetery Administration properties, Caron said.