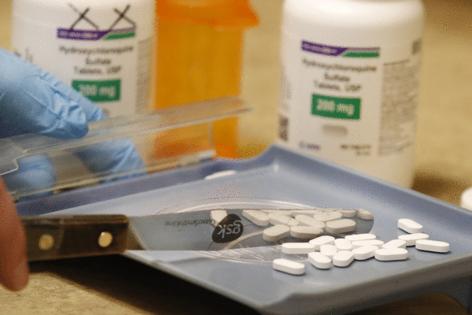 Officials of another Montana hospital accused public officials of threatening and harassing their health care workers for refusing to treat a politically connected COVID-19 patient with that antiparasitic drug or hydroxychloroquine, another drug unauthorized by the Food and Drug Administration to treat COVID.

And in neighboring Idaho, a medical resident said police had to be called to a hospital after a COVID patient’s relative verbally abused her and threatened physical violence because she would not prescribe ivermectin or hydroxychloroquine, “drugs that are not beneficial in the treatment of COVID-19,” she wrote.

These three conflicts, which occurred from September to November, underline the pressure on health care workers to provide unauthorized COVID treatments, particularly in parts of the country where vaccination rates are low, government skepticism is high, and conservative leaders have championed the treatments.

“You’re going to have this from time to time, but it’s not the norm,” said Rich Rasmussen, president and CEO of the Montana Hospital Association. “The vast majority of patients are completely compliant and have good, robust conversations with their medical care team. But you’re going to have these outliers.”

Even before the pandemic, the health care and social assistance industry — which includes residential care facilities and child day care, among other services — led all U.S. industries in nonfatal workplace violence, according to the Bureau of Labor Statistics. COVID has made the problem worse, leading to hospital security upgrades, staff training and calls for increased federal regulation.

Ivermectin and other unauthorized COVID treatments have become a major source of dispute in recent months. Lawsuits over hospitals’ refusals to provide ivermectin to patients have been filed in Texas, Florida, Illinois and elsewhere. The ivermectin harassment extends beyond U.S. borders to providers and public health officials worldwide, in such countries as Australia, Brazil and the United Kingdom. Even so, reports of threats of violence and harassment like those recently seen in the Northern Rocky Mountains region have been relatively rare.

Ivermectin is approved to treat parasites in animals, and low doses of the drug are approved to treat worms, head lice and certain skin conditions in humans. But the FDA has not authorized the drug to treat COVID. The agency says that clinical trials are ongoing but that the current data does not show it is an effective COVID treatment and taking higher-than-approved levels can lead to overdose.

Likewise, hydroxychloroquine can cause serious health problems and the drug does not help speed recovery or decrease the chance of dying of COVID, according to the FDA.

In Missoula, Montana, the Community Medical Center was placed on lockdown and police were called on Nov. 17 after a woman reportedly threatened violence over how her relative was being treated, according to a Police Department statement. Nobody was arrested.