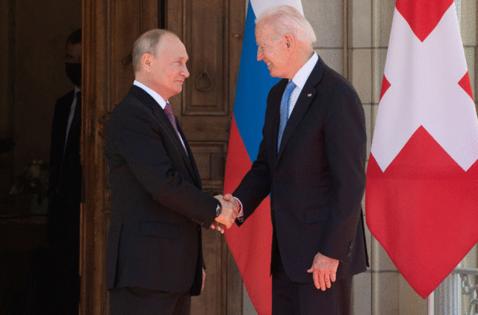 WASHINGTON — U.S. Secretary of State Antony Blinken and Russian Foreign Minister Sergei Lavrov had a testy exchange over Ukraine at a dinner with dozens of their colleagues this week, according to people familiar with the discussions.

The verbal tension erupted as the U.S. and its European allies seek ways — including possible sanctions — to counter the threat of a Russian invasion of Ukraine after President Vladimir Putin’s troop buildup on the neighboring country’s border.

Lavrov took the floor at the Organization for Security and Cooperation in Europe dinner in Stockholm on Dec. 1 to revisit Russia’s view that the collapse of a pro-Moscow administration in Ukraine in 2014 was a coup, according to two of the people. He also alleged that the North Atlantic Treaty Organization and the European Union were suppressing dissent and threatening Russia.

Blinken responded by recapping the 2014 events, including that forces loyal to then-President Viktor Yanukovich fired on peaceful protesters in Kyiv, killing more than 100 people, before he fled and surfaced in Russia. Blinken also told his Russian counterpart that NATO is a defense alliance.

Russian Foreign Ministry spokeswoman Maria Zakharova dismissed reports that Blinken had shut down Lavrov during the exchange at the 57-nation forum. She was responding on Facebook to Ukrainian media reports that Foreign Minister Dmytro Kuleba and Blinken had put Lavrov, one of the world’s most senior diplomats, in his place.

Swedish Foreign Minister Ann Linde, who hosted the dinner preceding an OSCE meeting on Thursday, said on Twitter that the conversation suggested the formal talks would be “lively, brave and truthful.”

President Joe Biden and Putin are expected to hold a virtual meeting as early as Tuesday amid the surge in tension. A video conference between Biden and Putin is planned for Dec. 7, Kremlin spokesman Dmitry Peskov said by text Saturday. The White House didn’t respond to a request for comment.

Biden said Friday he anticipates a “long discussion” with the Russian president over the threat of an invasion of Ukraine. He dismissed the Russian leader’s warning that deployment of Western weapons or troops represented a “red line.”

Russia annexed Crimea from Ukraine by military force in 2014, causing a standoff between Moscow and the west that remains unresolved. Putin has denied planning to invade Ukraine.

The U.S. has shared intelligence with its allies setting out Russian plans to potentially invade in early 2022, should Putin decide to make a move. White House officials said Friday they were considering economic sanctions and security assistance to Ukraine in response to the Russian troop buildup.

The U.S., EU members and the U.K. are working on a process for drafting a catalog of sanctions that could be imposed on Russia if its forces invade Ukraine, two of the people said. That process envisages an agreement to seek a joint package of possible sanctions if Russia doesn’t show signs of backing down by Christmas.