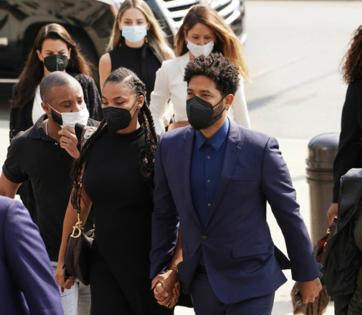 CHICAGO — Not long after they allegedly pretended to beat up actor Jussie Smollett in January 2019, two Chicago brothers took off for their ancestral home of Nigeria, where they were going to audition for a show called “Big Brother Naija.”

The brothers, aspiring actors Abimbola and Olabinjo Osundairo, never got the roles. But they wound up starring instead in a far higher-profile drama right here in their hometown:

Over two days this week, the Osundairo brothers’ long-awaited testimony riveted jurors and spectators at the Leighton Criminal Court Building, where they laid out in detail a bizarre plot allegedly hatched by Smollett to pretend to beat up the “Empire” actor, pour bleach on him and wrap a rope around his neck while shouting racist and homophobic slurs.

Both brothers said Smollett had hoped the fake attack would be captured on a surveillance camera near his Streeterville apartment and splashed in the media, putting pressure on the “Empire” studio to address what he felt were security concerns.

Although the camera turned out to be pointed up the street and the incident was not recorded, Smollett’s allegations that he was attacked made international headlines just the same. Two weeks later, after the Osundairo brothers were arrested at O’Hare International Airport as they returned from Nigeria, they agreed to cooperate against Smollett, who is now standing trial on charges of lying to the police.

The case is now in the hands of the defense, which has tried to paint the brothers as criminals and homophobes who were using Smollett to advance their own budding acting careers.

Prosecutors have presented significant collateral evidence that seems to corroborate what the brothers have said — including cellphone records, text messages, surveillance video, taxi and ride-share receipts — and Smollett’s attorneys might have an uphill battle in convincing the jury their client was actually the victim of a horrific crime.

Without smoking-gun evidence either way, only Smollett himself could refute the brothers’ testimony — and when the trial resumes Monday, all eyes will be on whether he takes the stand.

Smollett’s attorneys have played close to the vest any discussion about having Smollett testify. They did not mention to jurors in opening statements whether they would hear from the actor.