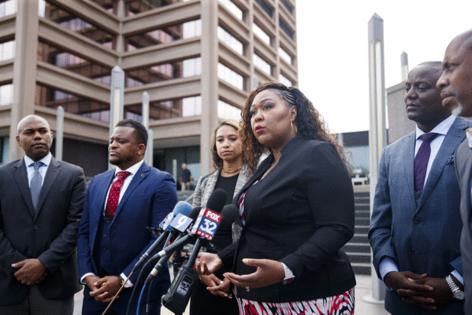 CHICAGO — It was a jaw-dropping moment in an already dramatic trial: An attorney for Jussie Smollett said in court that, just moments before, the judge presiding over the case had lunged at her while attorneys huddled in a sidebar.

Linn vigorously denied it, and the courtroom devolved into something close to chaos. Spectators murmured, attorneys began an animated argument for a mistrial, and Linn denied the accusation strenuously. He had simply been extremely surprised at what attorneys requested during the sidebar, he said.

The story spread like wildfire through the Leighton Criminal Court Building, where Linn has presided over a felony courtroom for years.

On Friday, Walker told The Chicago Tribune she believed Linn’s physical response was spontaneous and not intended to intimidate — perhaps it was even involuntary — but it was shocking all the same.

“I was in disbelief,” she told the Tribune. “… I did not expect that type of reaction (to) me doing my job.”

The incident was touched off during Walker’s cross-examination of Olabinjo Osundairo, one of the state’s key witnesses, who testified Smollett recruited him and his brother to stage a hoax hate crime attack on him one night in January 2019.

Attacking the brothers’ credibility is central to the defense case. They are expected to argue, in part, that the brothers may have actually attacked Smollett, perhaps motivated by homophobia.

To bolster that argument, Walker showed jurors texts from Olabinjo Osundairo that called someone “fruit” and “gaylord,” as well as an exchange between him and his brother in which he referred to someone who might have been gay as “sicko.”

During the course of the questioning Linn said the matters being raised were “very collateral,” at which point Walker and her team repeatedly requested a sidebar.