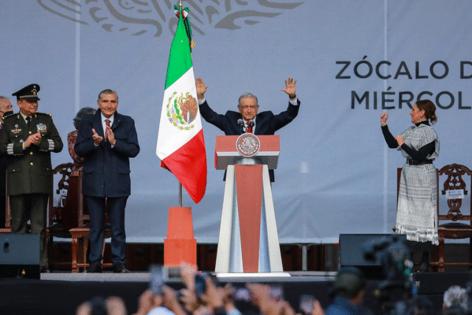 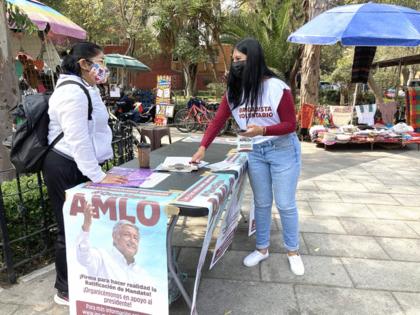 He urged the Mexicans packed into the Zócalo to participate in an April referendum to decide whether they want to boot him from office more than two years early.

“None of, ‘They chose me for six years and I can do whatever I want,’” López Obrador said at the rally Wednesday to mark his midterm. “If one who governs is not up to the task and obeying the people, revoke their mandate and out!”

The president, 68, likely believes he has nothing to worry about.

Recent polls show that about two-thirds of the public approve of his performance since taking office in 2018 on a platform that promised a radical transformation of Mexican society to combat corruption and inequality and to roll back free-market economic policies.

Families and marching bands making their way to the Zócalo passed vendors hawking gray-haired López Obrador dolls and posters with the hashtag #QueSigaAMLO, or “may AMLO continue,” referring to the president by his initials. Many said they view a referendum, authorized by a 2019 constitutional reform spearheaded by the president, as proof of his honest character when compared to decades of presidents accused of corruption.

“AMLO is the first president that dares to put himself to the test before the people,” said Debanhi Andrea Garcia, 22, who drove 14 hours from the state of Nuevo León with her boyfriend. “Because he’s like that, we support him.”

Mexicans have until Dec. 25 to sign a petition supporting the referendum, which can move forward only with the signatures of at least 3% of eligible voters, among other caveats.

So far, the initiative has received more than 703,000 signatures from Mexicans who have valid voting credentials, or 25% of the required total, according to the National Electoral Institute, an independent agency overseeing the process. (That tally includes signatures that will be discarded because they are duplicates or have other irregularities.)

Officially called the “revocation of mandate,” the measure follows other efforts by the president to increase citizen engagement in public policy. López Obrador has also backed referendums to decide whether former Mexican presidents should be prosecuted for alleged crimes, on the construction of a new airport near Mexico City and on the development of a tourism train line that would run through the Yucatan Peninsula.