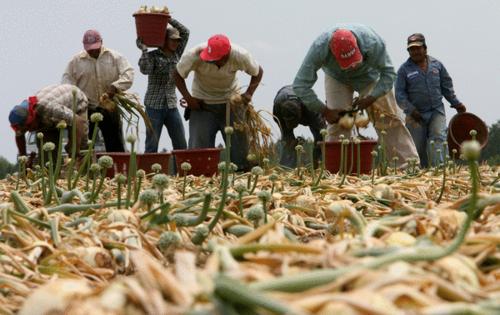 Victims include over one hundred laborers smuggled from Mexico and Central America into “brutal” and “inhumane” working conditions. Under the threat of gun violence, some were allegedly forced to dig for onions with their bare hands, earning only 20 cents for each bucket harvested. At least two people died on the job. Another was allegedly repeatedly raped.

When not out in the fields, workers were detained in work camps surrounded by electric fencing, or held in cramped living quarters, including dirty trailers with raw sewage leaks. There was little to no access to food or safe drinking water.

Twenty-four accused members and associates of the criminal enterprise that perpetuated the exploitation now face a slew of felony charges, according to a press release from the U.S. Attorney’s Office for the Southern District of Georgia. The multi-agency cooperation that yielded the indictment – dubbed “Operation Blooming Onion” – may be one of the largest-ever human trafficking and visa fraud investigations in the country, VICE News reported.

Only two of the defendants are described as South Georgia business owners in the indictment; most were labor contractors or recruiters. Their alleged criminal mistreatment of workers took many forms.

According to the indictment, laborers were charged unlawful fees for transportation, food and housing. And though they were putatively hired for agricultural work, some migrants were illegally used for lawn care, construction, and repair tasks. To prevent escapes, members of the accused crime ring unlawfully confiscated workers’ passports and documents. Conspirators also sold and traded workers amongst themselves, per the indictment.

“The American dream is a powerful attraction for destitute and desperate people across the globe, and where there is need, there is greed from those who will attempt to exploit these willing workers for their own obscene profits,” David Estes, acting U.S. attorney for the Southern District of Georgia, said in a statement.

“Thanks to outstanding work from our law enforcement partners, Operation Blooming Onion frees more than 100 individuals from the shackles of modern-day slavery and will hold accountable those who put them in chains.”

The crimes chronicled in the indictment were alleged to have occurred in the South Georgia counties of Atkinson, Bacon, Coffee, Tattnall, Toombs and Ware, where local farmers paid the defendants to provide contract laborers.