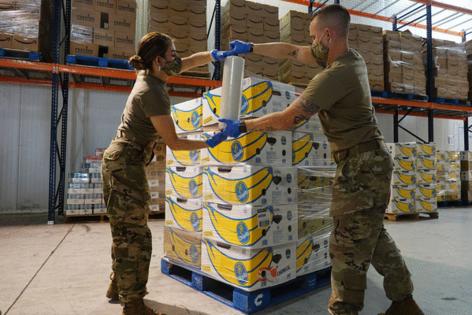 DeSantis said he is asking the state Legislature for $3.5 million to reactivate the guard and train some 200 volunteers who would supplement the state’s quick responses during emergencies such as hurricanes.

“We want to be able to have a quick response capability and re-establishing the Florida State Guard will allow civilians from all over the state to be trained in the best emergency response techniques and have the ability to mobilize very, very quickly,” DeSantis said.

DeSantis’ announcement drew pushback from Nikki Fried, the state’s agriculture commissioner and a Democrat who is running for governor. She said Florida “doesn’t need a paramilitary force” that only answers to DeSantis. “Millions of Floridians know what it’s like to live under regimes like this — and came to our state to escape them,” Fried tweeted. “This must be stopped.”

DeSantis’ press secretary, Christina Pushaw, tweeted back at Fried, telling her to “maybe ease up on scaremongering about ‘paramilitaries’” and provided a link to a webpage that lists such defense forces in many other states, as well as in Puerto Rico.

Tim Lenz, a political science professor at Florida Atlantic University, said DeSantis is “clearly positioning himself” to occupy the inside track for Republican presidential nomination in 2024 as a strong leader who contrasts with President Joe Biden. The governor, Lenz noted, has characterized the president as “soft” on border security, immigration policy and support for law enforcement and the military.

“The governor is actively courting the veterans’ vote and the law enforcement votes,” Lenz said. “The language he used when describing the initiative reflects that.”

In October 1940, more than a year before the Japanese attacked Pearl Harbor, President Roosevelt signed the State Guard Act, which authorized the states to create replacement forces for National Guards whose members were destined for overseas service. With war on the horizon, Congress passed the act to allow states to maintain forces other than the National Guard, which had been federalized.