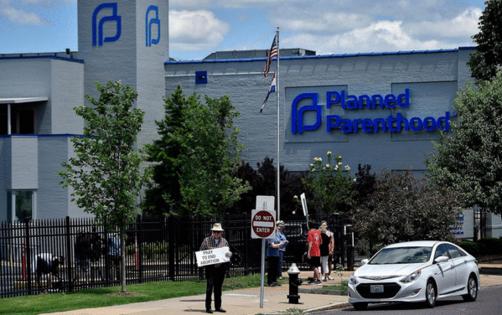 KANSAS CITY, Mo. — Missouri Republicans, encouraged by an upcoming U.S. Supreme Court decision many anticipate will severely reduce or eliminate the federal right to end a pregnancy, are poised to push an aggressive new slate of anti-abortion measures in the General Assembly next year.

Proposals include requiring women to undergo an ultrasound before an abortion, raising criminal penalties for illegal abortions and mandating medical care for babies "born alive" during the procedure. Other bills would strengthen existing prohibitions on public funding of abortion providers.

Missouri, where Republicans dominate state government, has already nearly eliminated surgical abortions. Years of restrictions and regulations have steadily chipped away at patient access. Abortion is available at just one location in Missouri, a Planned Parenthood clinic in St. Louis, and only a few dozen were reported in 2020. Patients with time and means often travel to Kansas or Illinois instead.

But the Supreme Court's ruling on a Mississippi law that bans abortion after 15 weeks of pregnancy, expected in June, has raised hopes among Missouri abortion rights opponents. They expect that lawmakers, many who are running for higher office in 2022, will soon go further than ever in attacking the procedure.

They're also adamant the legislature shouldn't wait for the decision.

"Any statutes we have in place prior to the Supreme Court ruling can only be strengthened and I think it is very important to pass bills such as mine this session," said Rep. Brian Seitz, a Branson Republican who has introduced a bill to increase the minimum prison sentence for performing an illegal abortion from one year to three years.

Following oral arguments on Wednesday, many legal observers said that, at a minimum, they expect the court to let Mississippi's 15-week ban stand. It could also overturn Roe v. Wade, the landmark 1973 case that guaranteed the federal right to an abortion. Missouri already has an 8-week ban on the books, but it's currently blocked in federal court.

A Supreme Court decision upholding the Mississippi law could quickly allow the Missouri statute to go into effect, depending on the reasoning of the justices. The measure, signed by Republican Gov. Mike Parson in 2019, includes "trigger" provisions to ban abortion at 14 to 20 weeks if the Mississippi law is upheld but the court still preserves some right to an abortion and the 8-week ban is unconstitutional.

"I do think there's a level of extremist politicians feeling emboldened by the direct challenge to Roe v. Wade," Wales said. "Although we don't know exactly what the Supreme Court will do, this is the most direct threat to abortion access, particularly in our region of the country, that has happened in many, many years."

NEW YORK — The funeral for the rookie police officer fatally shot in Harlem will be held in Manhattan’s iconic St. Patrick’s Cathedral.

WASHINGTON — U.S. Secretary of State Antony Blinken rejected pressure to immediately escalate sanctions on Russia for its military buildup around Ukraine, saying it would limit the West's options in the future.

WASHINGTON — President Joe Biden’s chief medical adviser expressed optimism that the omicron surge that has pushed COVID-19 infections and hospitalizations to records will soon peak, though that decline won’t be ...Read More