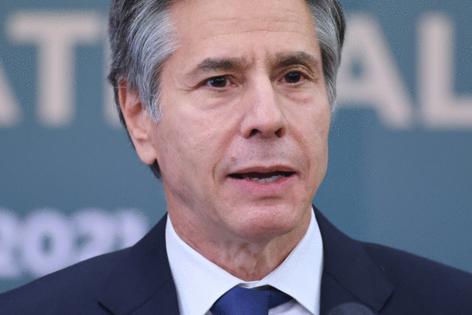 WASHINGTON — So far, it's been a war of words. Could it flare into something more dangerous?

Against the backdrop of a major buildup of Russian forces near Ukraine, a former Soviet republic and struggling democracy sandwiched between Russia and the West, the rhetoric and prospect for conflict have been sharpening daily.

U.S. Secretary of State Antony J. Blinken, meeting his Russian counterpart in Stockholm on Thursday, explicitly warned Moscow against an invasion — a scenario that Ukraine's government, backed by both NATO and the Biden administration, has described as a real possibility. The Kremlin, in turn, has hinted that an intervention by its troops may be necessary to halt escalating separatist fighting in eastern Ukraine.

Much of what unfolds in coming days or weeks is up to Russian President Vladimir Putin, whose motives and intent are not entirely clear. Analysts say that as always, Russia's autocratic leader is cannily weighing risks and benefits — determining whether concessions he might extract by threatening Ukraine are worth the now-heavy odds of punishing Western sanctions and the chance of a domestic backlash if Russian troops suffered significant casualties.

"Putin is definitely as serious as he could be," Hanna Shelest, a leading Ukrainian security expert, told an Atlantic Council webinar on Thursday. "He's definitely raising the stakes in this game."

Although the direct involvement of American ground troops is considered a nonstarter, Washington sees Ukraine as a close partner, and the U.S. has for years provided sophisticated weaponry, including Javelin antitank missiles, to the Ukrainian government.

And even sometimes fractious European allies are showing notable solidarity in warning of painful economic consequences should the Russian leader become overly aggressive.

Here is a look at some of the factors at play in Ukraine's latest crisis.

Q. How serious is Russia's buildup of forces?

A. After Putin's audacious 2014 seizure of the Black Sea peninsula of Crimea — which Moscow then illegally annexed — Ukraine has considered itself to be under constant threat.