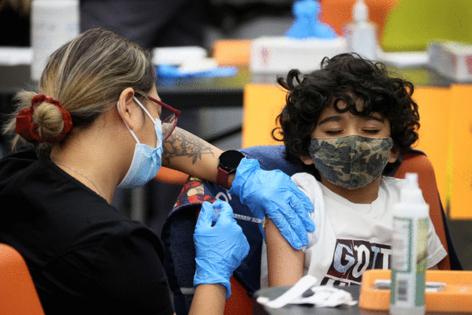 CHICAGO — A week after Thanksgiving, Illinois on Thursday reported this year’s highest daily total of new coronavirus cases, while COVID-19 hospitalizations have risen higher than any point since last winter.

The 11,524 new confirmed and probable cases of COVID-19 reported by the state health department were the most in one day since Dec. 1, 2020, when 12,542 cases were reported. Over the past week, the state has averaged 5,313 daily cases, the highest level since mid-January.

There are number of potential factors contributing to Thursday’s spike. There were roughly twice as many test result reported compared with the recent average, possibly because of lags in reporting over the holiday weekend, Illinois Department of Public Health spokeswoman Melaney Arnold said.

But she added that “we are starting to see cases associated with family gatherings and travel” over the Thanksgiving holiday.

In addition, the state is seeing a high percentage of positive results as a share of total tests. The test positivity rate is approaching 6%, after dropping close to 2% a month earlier, according to a Tribune analysis of state data.

Stark differences can be seen among the 11 regions IDPH has set up to monitor the pandemic. The North region, roughly the part of Illinois west of Chicago and its suburbs, has a positivity rate approaching 10%, while the region for Will and Kankakee counties is near 8%. Chicago remains the lowest, at about 4%.

The high number of new daily cases comes as Illinois prepares for the new omicron variant, first reported last week in southern Africa, and as state and federal officials push people to get COVID-19 vaccine booster shots. Cases of the omicron variant have been reported in California, Minnesota, New York and Colorado.

With nearly two-thirds of Illinois residents 5 and older fully vaccinated and a growing portion of the population having received boosters, Gov. J.B Pritzker reiterated Thursday that his administration’s focus is on the number of COVID-19 patients who end up in the hospital, the overwhelming majority of whom aren’t fully vaccinated.

“I’ve always said that what we’re watching are hospitalizations and the seriousness of illness as well — that’s people going into the hospitals — and then overall capacity in hospitals,” Pritzker said during an unrelated event in Chicago’s Back of the Yards neighborhood.

Pritzker said hospitals haven’t been stretched thin enough by the latest surge to require measures such as suspending elective surgeries, which has happened at some hospitals in New York and Pennsylvania.