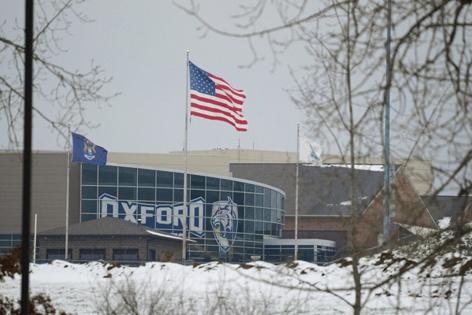 The mother of a sophomore student accused of opening fire inside his Michigan high school previously wrote an open letter to former President Donald Trump praising his support for the Second Amendment.

Ethan Crumbley on Wednesday was charged as an adult with two dozen crimes — including murder, attempted murder and terrorism causing death — in connection with the massacre inside Oxford High School. Authorities said the attack unfolded over the course of just five minutes Tuesday afternoon, during which four people were fatally shot and seven more wounded.

The weapon used to carry out the violence, a 9 mm semi-automatic handgun, was legally purchased just days earlier by the 15-year-old’s father during a Black Friday shopping trip. Crumbley's family members are seemingly adamant supporters of the right to possess firearms and guns, evidenced by a blog post uncovered by the Daily Beast reportedly written by Crumbley’s mother about Trump.

“As a female and a Realtor, thank you for allowing my right to bear arms. Allowing me to be protected if I show a home to someone with bad intentions,” she wrote in November 2016. “Thank you respecting that Amendment.”

Jennifer added that she liked the fact that the former president was “not good at public speaking” and that she did not blame him for not making his tax returns public. She also wrote about Ethan, just 10 years old at the time, explaining how she was skipping bill payments in order to afford a tutor capable of teaching “Common Core.”

“My son struggles daily, and my teachers tell me they hate teaching it but the (sic) HAVE to,” Jennifer wrote. “I have to pay for a Tutor, why? Because I can’t figure out 4th grade math. I used to be good at math. I can’t afford a Tutor, in fact I sacrifice car insurance to make sure my son gets a good education and hopefully succeeds in life.”

The open letter was signed: “A hard working Middle Class Law Abiding Citizen who is sick of getting f---ed in the a-- and would rather be grabbed by the p----.”

Her husband James Crumbley, echoed the sentiment by sharing the post on his Facebook page, writing “My wife can be spot on. Sometimes.”

Oakland County Prosecutor Karen McDonald earlier this week said she was “considering charges against both parents” in connection with the school shooting.

“Owning a gun means securing it properly and locking it and keeping the ammunition separate,” she said.

According to Michigan gun laws, it is illegal for someone younger than 18 to possess a gun in public in the state. What’s more, it’s illegal to carry a concealed gun, and many school districts in the state also ban open carry.

No motive has been provided for the violence, but McDonald said it was premeditated, citing a “mountain of digital evidence” against the suspect.