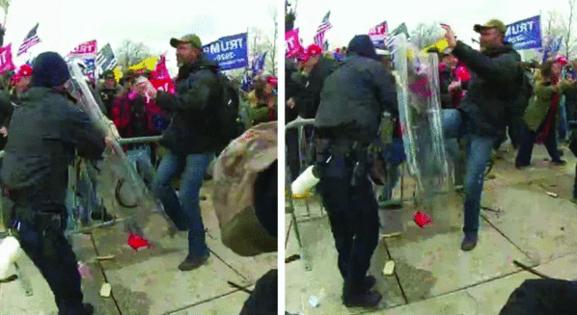 Kevin Douglas Creek, 47, faces between 24 and 30 months in prison, according to the terms of a plea agreement entered before U.S. District Court Judge Dabney L. Friedrich. Creek will be sentenced on March 10 and remains free on bond.

Creek, who served in the Marines from 1995 to 1999, was charged with seven felony and misdemeanor crimes, a combination of which could have landed him in prison for much longer. The plea agreement dismisses all of them except for the charge that he hit an officer from D.C.'s Metropolitan Police Department and kicked a U.S. Capitol Police officer who were attempting to stop the rioters. That charge carried a possible eight-year sentence if Creek had been convicted at trial.

It is not clear what led Creek to take part in the riot. He has no known connections to extremist groups and has no prior criminal convictions. Court records say he admitted being armed with mace and a knife in his boot while at the U.S. Capitol.

A father of two, Creek owns his own roofing contracting business that he operates out of his Johns Creek home.

When contacted by the FBI, Creek admitted to participating in the riot but said he did not remember assaulting the officers. When agents asked him if he regretted his participation in the unrest, he reportedly responded “50/50.”

That lack of remorse is what led a magistrate judge in Atlanta to chastise him and deny him bond in a hearing in June. That decision was overturned a few days later by a magistrate in Washington. Creek ultimately was released on his own recognizance, although only after a delay apparently caused by the competing orders from the two judges.

In Wednesday’s hearing, Friedrich read through the facts behind the charges, including asking Creek, who appeared via videoconference from Georgia, whether he knew he was assaulting a federal officer when he kicked at the Capitol Police officer.

Quietly, Creek responded, “I don’t believe it was in my mind at the time, honestly, your honor.”

Creek said very little in the hearing aside from confirming that he understood the plea agreement and that he was guilty of the crime. In court filings, prosecutors said they have police body camera footage showing the assaults, and the indictment includes still images of Creek at various stages of the riot, although not inside the Capitol itself.

Creek is the third of 15 Georgians charged in the Jan. 6 riot to plead guilty, and he faces the longest sentence yet.

In September, Cleveland Grover Meredith Jr., pleaded guilty to threatening to kill Nancy Pelosi. He faces between six month and two years in prison when he is sentenced later this month.

Glen Mitchell Simon, who pleaded guilty in October to entering the Capitol with other rioters, has a possible six-month sentence facing him.