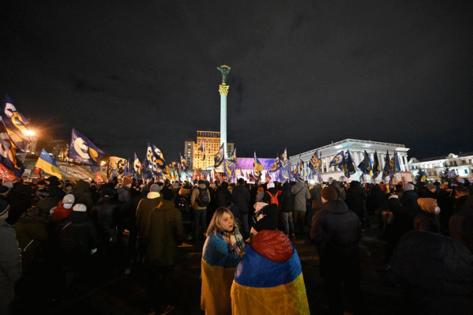 MOSCOW — Vladimir Putin again accused the U.S. and its allies of menacing Russia while top diplomats from the two former Cold War rivals set plans to meet Thursday amid rising tensions around a buildup of Russian troops near the border with Ukraine.

“The threat on our Western frontier is really growing,” Putin told foreign ambassadors in the Kremlin Wednesday. “For us, this is more than serious.”

While the Kremlin is already taking “appropriate” military measures in response, Putin said Moscow is seeking “legally binding guarantees” from the U.S. and its allies that the North Atlantic Treaty Organization won’t expand further in the east and that they won’t deploy weapons near its borders that threaten Russia. “Our Western colleagues haven’t fulfilled oral obligations” in the past, he said.

His comments came as the U.S. and Russia announced plans for the first direct contact between senior officials in weeks. Secretary of State Antony Blinken will meet Russian Foreign Minister Sergei Lavrov Thursday in Stockholm, both sides said. Before Blinken meets the Russian official, he will meet Ukrainian Foreign Minister Dmytro Kuleba separately.

Blinken, now in Latvia for a NATO summit, said Tuesday the U.S. is “very concerned” about Russian troop movements along Ukraine’s border and warned that “any renewed aggression would trigger serious consequences.”

Ukraine’s president, Volodymyr Zelenskiy, said Wednesday direct talks with Russia are the only way to resolve the conflict. But the Kremlin brushed off that appeal, saying that Kyiv should negotiate with Russian-backed separatists in the east of the country, something Zelenskiy’s government has refused to do.

Russia said earlier this week it’s making preparations for a conversation between Putin and U.S. counterpart Joe Biden, their first since the massive Russian military buildup near Ukraine’s borders sparked alarm. Biden said last week he expects to speak to Putin soon but the U.S. hasn’t given any details on timing.

Early last month, Biden dispatched Central Intelligence Agency Director William Burns to Moscow to warn officials about U.S. concerns on the buildup near Ukraine. Among other meetings, Burns spoke to Putin by phone, as well. But Western worries about the massing of forces have not abated since then.

Putin on Tuesday warned the West not to cross Russia’s security “red line” by stationing NATO military infrastructure in Ukraine. This would leave Moscow at the risk of attack in as little as five minutes and force his country to respond by taking counter-measures, he said. The U.S. and U.K. said any Russian incursion into Ukraine would trigger serious diplomatic and economic responses.

Russia and the U.S. are also at loggerheads over the size of their diplomatic representations. Moscow threatened to expel U.S. diplomats if Washington goes ahead with ordering 27 Russian envoys out of the U.S. by Jan. 30, according to Deputy Foreign Minister Sergei Ryabkov.

In total, 55 Russian diplomats have to leave the U.S. by mid-2022 because of rules limiting them to three-year visas. Russia earlier this year barred the U.S. from employing Russian citizens, forcing the U.S. to cut consular staff by 75% and suspend most visa services.

Russia’s Foreign Ministry said it would impose a similar three-year limit on U.S. diplomats, forcing more to leave, if the U.S. goes ahead with its plans.