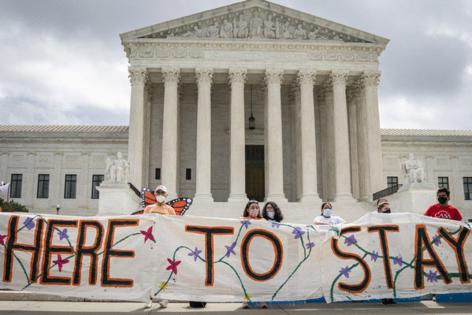 WASHINGTON — Democrats made their case Wednesday for including temporary immigration protections in their social spending bill — setting the stage for a potential showdown on the party’s last-ditch effort to provide some degree of protection for the undocumented community.

Senate Democrats met with Parliamentarian Elizabeth MacDonough to argue the immigration protections are eligible to be included in a $2.2 trillion reconciliation bill, while Senate Republicans opposed inclusion. Under the so-called Byrd rule, reconciliation bills, which can pass with a filibuster-proof majority, must primarily impact the federal budget.

The bipartisan meeting, known as a “Byrd bath,” follows an information discussion MacDonough had Nov. 23 with Senate staffers, who emerged feeling positive, according to a source familiar with the meeting. The source said MacDonough, a Senate adviser, did not reject their proposal outright, as she had with earlier versions of the immigration section, and indicated she wanted to move forward with the process.

Judiciary Chairman Richard J. Durbin, D-Ill., who oversees the bill’s immigration provisions, told reporters Tuesday that regarding the earlier, informal meeting, he didn't “have any indication one way or the other” as to MacDonough’s decision.

“She kept it very close to the vest and didn’t react as we made our initial presentation,” he said.

Kerri Talbot, deputy director of Immigration Hub, told reporters Wednesday the parliamentarian may have suggested revisions to the provisions, and she expects another “Byrd bath” after those changes are incorporated.

Top Senate Democrats involved also acknowledge that changes to the House-passed immigration section are likely to usher the provisions past the finish line.

“There will have to be some adjustments,” Sen. Alex Padilla, D-Calif., chair of the Judiciary Committee’s immigration panel, said Tuesday. He added, “We’re gonna go to the parliamentarian first and then adjust.”