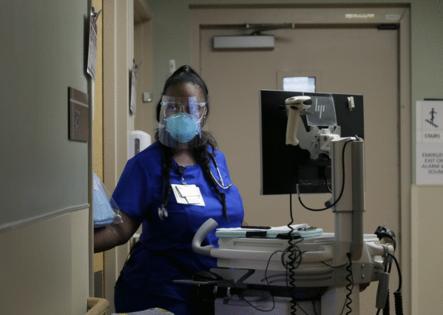 COLUMBUS, Ohio — More Ohioans were hospitalized for COVID-19 this week than at any time since last winter's surge in cases, a development that could worsen still with more cold weather and holidays approaching.

"With the winter season, I don't want to say it was expected, but there was always a concern it could happen," said John Palmer, spokesman for the Ohio Hospital Association. "It seems like hospitals have been managing high capacities since summer ... they never really got a reprieve. It never really settled back down."

As of Wednesday, Ohio had seen a 61% increase in hospitalizations in three weeks and the hospital association estimates one in five people hospitalized have tested positive for the virus.

The rise in hospitalization varies across the state of Ohio.

So far, central Ohio hasn't seen hospitalizations exceed levels from the spike of late-summer and early fall. On Wednesday, 457 people were hospitalized in central Ohio which was actually down from a recent high of 477 on Tuesday, OHA data shows.

Instead, it appears the northeastern corner of the state is bearing the brunt of the virus.

An eastern region of the state that includes Akron and Canton had 1,061 people hospitalized Wednesday, which is more than anytime since the pandemic began, data shows.