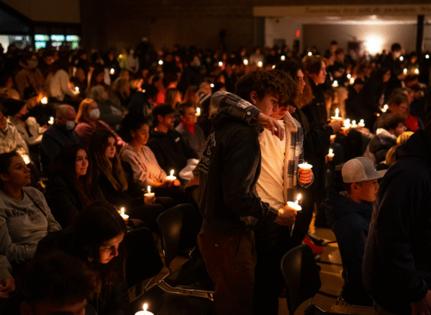 McDonald said overall she approved charging Crumbley with one count of terrorism causing death, four counts of first-degree murder, seven counts of assault with intent to murder and 12 counts of possession of a firearm in the commission of a felony for Crumbley.

There's "a mountain of digital evidence," McDonald said, including social media and videotape, and her office is confident that the shootings were "absolutely premeditated."

"This is unspeakable," she told reporters during a Wednesday afternoon briefing. "We send our kids to school and we think that they're going to be safe."

The terrorism charge, she added, was warranted not just for those who lost their lives but for the students and families forever traumatized by the rampage.

"What about all the children who ran, screaming, hiding under desks? What about all the children at home right now who can't eat and can't sleep and can't imagine a world where they could ever step foot back in that school," McDonald said after announcing the charges. "Those are victims too and so are their families and so is the community. The charge of terrorism reflects that."

The prosecutor said she'd only say the name of the suspect once Wednesday, adding "we want to keep our focus on the victims of this horrific tragedy."

McDonald noted Juliana, a volleyball player and basketball player, was characterized by her father as “one of the happiest and most joyful kids.”

Baldwin was a talented artist and big sister, Myre was a junior football player and honor student, and Shilling was a co-captain of the bowling team and a golfer, she said.