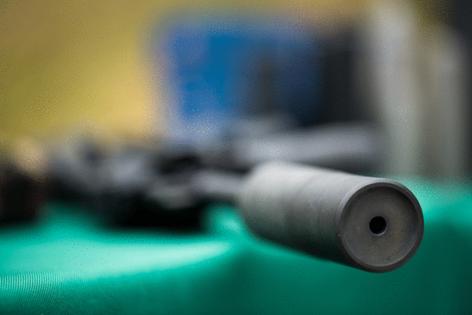 ATLANTA — In April, dozens of federal agents swarmed Wayne Hawkins’ rural Carroll County home armed with a warrant to seize assets, shut down his business and gather evidence of something he claims he never sold: illegal firearm silencers.

The U.S. Bureau of Alcohol, Tobacco and Firearms targeted Hawkins’ business, Hawk Innovative Tech, because it sold “solvent traps,” cylindrical tubes that fit on the end of a gun. The traps are designed to catch cleaning solvents, but they can easily be modified into silencers. In fact, there are dozens of YouTube videos showing how it is done, including some specifically for Hawk Innovative Tech’s merchandise.

The ATF has paid increasing attention to the proliferation of unregistered silencers, also known as “suppressors” for their ability to suppress gunfire noise. The bureau has targeted companies that specialize in selling solvent traps, as well as fuel filters that can be similarly modified, in ways that allegedly cater to law breakers.

“The possession of unregistered suppressors marketed as ‘solvent traps’ or ‘fuel filters’ is a crime that has a direct impact on public safety,” Benjamin P. Gibbons, special agent in charge of the ATF’s Atlanta field office, said in a statement.

Gibbons said the ATF is concerned about the proliferation of solvent traps being used as unregistered silencers. In an unrelated proceeding earlier this month, Michael Helterbrand, a member of a violent extremist group, was sentenced to 20 years in prison in foiled plot to murder a Bartow County couple. As part of the preparation for the attack, Helterbrand bought a solvent trap to muffle the sound of gunshots, prosecutors said.

Over the past several years, the ATF has raided gun companies selling solvent traps in Utah, Arizona and Pennsylvania, seizing their websites and assets in a way similar to the raid on Hawk Innovative Tech.

In the Hawk Innovative Tech raid, ATF agents seized nearly $300,000 in cash from multiple bank accounts owned by Hawkins, his wife and his business, along with thousands in silver bars and coins. The ATF justified the seizures by saying in court filings that the funds are “traceable” to acts of mail and wire fraud, smuggling and money laundering. The filing names Hawkins, his wife and two of his adult sons.

The Hawkinses deny the accusations, and no charges have been filed, but federal prosecutors describe the matter as “an ongoing criminal investigation.” Importing, making or selling unregistered silencers carries a possible 10-year prison sentence.

Gun owners can buy or make silencers legally, but doing so is a cumbersome and costly process. The approval process takes months and subjects the applicant to federal and local law enforcement scrutiny.