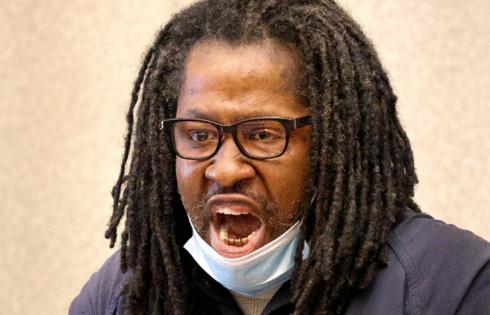 Earlier this month, a 12-person jury found Loyd, 46, guilty of first-degree murder in the 2017 killing of Orlando police Lt. Debra Clayton. The same jury must unanimously decide if Loyd should face execution before a judge can sentence him to death.

Before the state rested, jurors heard from Clayton’s cousin, Francine Thomas, who described Clayton as a “beautiful soul” and a loving mother, wife and daughter.

The day before Clayton was killed, she made lunch plans with her cousin and told her she was going to make shepherd’s pie for her husband, Thomas said. Clayton was buying those ingredients at the Walmart on Princeton Street when someone alerted her to Loyd’s presence in the store, she said.

Prosecutors say Loyd fatally shot Clayton after she tried to arrest him for killing his pregnant ex-girlfriend Sade Dixon.

“I still ache and my heart is broken,” Thomas said between sobs. “... I carry around the heaviest word in the English language — I feel nothing but hate.”

Prosecutors also played a video showing Clayton talking about her efforts to bridge the gap between community members and police.

During opening statements Monday at the Orange County Courthouse, prosecutors said Loyd deserves capital punishment because Clayton’s killing was one of multiple violent felonies committed by Loyd during his lifetime.

But Loyd’s attorney told jurors they must also weigh the mitigating circumstances in Loyd’s life, including a diagnosis of post-traumatic stress disorder and delusional disorder that affected his mental health during the killing.

Loyd was convicted of first-degree murder in 2019 for killing Dixon and her unborn child.

He avoided the death penalty after jurors recommended he be sentenced to life in prison without parole.