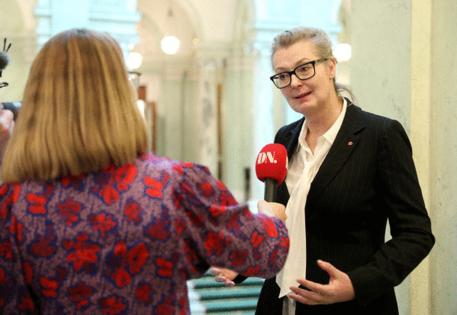 Lina Axelsson Kihlblom, 51, who was born a man and transitioned in the 1990s, was named school minister in Andersson’s new government, which consists of 12 women and 11 men.

“This is not a big deal, although it is important to me and many others who are experiencing the same issues,” Axelsson Kihlblom said in an interview with Swedish public radio after the appointment. “If I, in any small way, can be a role model or a trailblazer I am happy about that.”

As a school principal in one of Sweden’s most deprived areas, Axelsson Kihlblom became known in her home country when her successful work was chronicled in a televised documentary series. In her new role, she will seek to implement a ban on private profits from schools.

“Society needs to take control over schools,” Axelsson Kihlblom said at a press conference after her appointment. “Every student’s right to knowledge must be in focus, and not share price movements or religious beliefs.”

In 2015, Axelsson Kihlblom published an autobiography, and in an interview with public broadcaster SVT, she described realizing at the age of five that she was a girl in a boy’s body.

“I discovered early on that in order to be accepted I had to choose to live on life on the outside and another on the inside,” she said. “I played a game to be accepted, but I knew that one day I would blossom, and that was my salvation.”