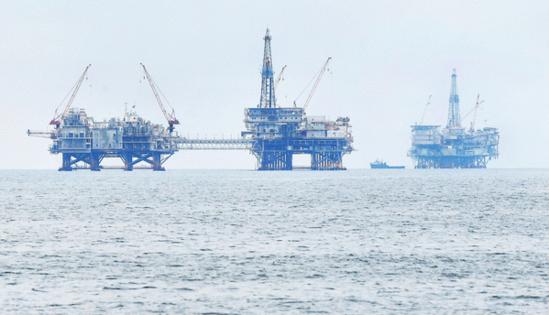 SACRAMENTO, Calif. — Offshore oil derricks dotting the California coastline continue pumping despite a history of catastrophic spills and vows from generations of politicians to send them to the scrapheap. They've even survived a modest attempt by state officials more than a decade ago to offer incentives to oil companies that chose to abandon their costly operations.

Now, the failure of California's "Rigs to Reefs" program, an effort to transform oil platforms into underwater artificial reefs, stands as a cautionary tale to those who have called for a drilling ban after thousands of gallons of crude washed ashore in Orange County in October.

"The question that we've been grappling with is how do we minimize risks to taxpayers and maximize the speed with which we can get these things gone," said state Sen. Bob Hertzberg, D-Van Nuys. "No one wants to deal with the oil companies, but the reality of the situation is you're gonna have to create a structure that works for everybody. Otherwise, we're going to continually be in this situation and there will be another spill."

Fed by concerns from some environmental advocates and a skepticism about the motives of California's billion-dollar oil industry, the Rigs to Reefs program that passed in 2010 was so complicated by political compromise that the permitting process became almost unworkable, Hertzberg said.

Not a single oil company has applied in the history of the program, according to the State Lands Commission, which has jurisdiction over state waters.

For years, Hertzberg made unsuccessful attempts to streamline the program, which was crafted by former Democratic Assembly Speaker John A. Pérez and signed into law by Republican Gov. Arnold Schwarzenegger in 2010. Hertzberg said he hasn't decided whether he'll try again to revive the Rigs to Reefs program in 2022, saying he'll have to see whether the idea has any support in the Legislature.

"If there's anything positive out of this oil spill it's possibly to reignite this conversation ... we all realize these oil platforms need to be decommissioned and come out," Garry Brown, president of the clean water advocacy group Orange County Coastkeeper, said during a hearing with state lawmakers on the Orange County oil spill this month. Brown supported the Rigs to Reef law.

"Oil companies want a clear path to compliance," he said. "They're operating in many cases at a loss, but it's cheaper to operate at a loss than it is to face millions for decommissioning."

In the meantime, there are calls to eliminate offshore drilling altogether.

Just days after a submerged oil pipeline spilled an estimated 25,000 gallons into the ocean off Huntington Beach in October, state Sen. Dave Min, D-Irvine, promised to introduce a bill in 2022 to end all drilling in California state waters, including under existing leases.

DETROIT — The manner in which the University of Michigan Board of Regents removed Mark Schlissel as president Saturday has drawn some criticism because it changed the course of the state's largest public university ...Read More