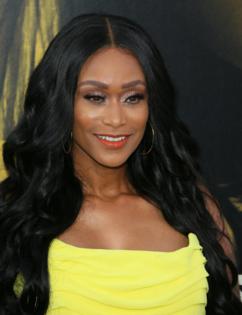 In 1993, the 22-year-old aspiring singer was cast in the second season of "The Real World" and was central to its most memorable moments — including an abortion documented by MTV cameras and a physical altercation with her roommate, David Edwards, that led to his departure from the series.

Seventeen years later, as a divorced mom with two children to support, she returned to the medium in VH1's "Basketball Wives" and later its spinoff, "Basketball Wives LA," where she spent nearly a decade expertly stoking the drama. Finally, in 2019, she kissed the genre goodbye — for good, so she thought — to focus on acting in projects like the Apple TV+ series "Truth Be Told," the Lee Daniels-produced sitcom "The Ms. Pat Show" and her popular web series, "The Bonnet Chronicles."

So when Paramount+ asked her to be a part of "The Real World Homecoming: Los Angeles," she said no. Over and over again. "I am not coming back. I am off reality TV, and I damn sure don't want to do that with those people I ain't talked to in 30 years," she recalled in a recent video chat. Then Roman's producing partner, Jill Ramsey, put it another way: "She said, 'Tami, this is where you started. Just go finish what you started.' That's when it clicked."

In August, Roman and her roommates returned to the same Venice Beach house they shared for six turbulent months during Bill Clinton's first term in the White House. There were long-overdue conversations about race, body image and the blanket-dragging incident that resulted in the "Real World's" first ejection — all documented in "The Real World Homecoming: Los Angeles," now streaming on Paramount+.

Roman says the experience was productive — to a point. "I really learned that no matter where you are in life, you have to meet people where they are, and not everybody is upwardly mobile. Some people are still exactly where you left them." But returning to communal living as a 51-year-old woman also had its drawbacks. "I couldn't poop for two weeks," she says with typical candor.

Roman — then known as Tami Akbar — was working at an HIV health care center in West Hollywood and performing with an En Vogue-esque R&B girl group when a co-worker told her she'd auditioned for "The Real World." Roman had never heard of the show but stumbled on a marathon that weekend on MTV. "People are on TV, just, like, living their lives? I didn't even know that was a thing. And so I said, 'Well, I could do that.'"

Using a bulky camcorder, she filmed an audition tape and delivered it, in person, to the "Real World's" production office, where she was told the season had already been fully cast. "I said, 'Well, I'm not leaving until you look at my tape.'" The strong-arming worked: a few days later, producers Mary-Ellis Bunim and Jonathan Murray called to tell her she made the cut.

"She had charisma from the first time I met her. She had this amazing ability to be vulnerable and be completely honest about who she is. There was a confidence there that made her incredibly attractive," said Murray, who was also compelled by her biography: Roman was raised by a single mom and had been homeless for a time, a fact that seemed to fuel her ambition. "There was just a sense that she was going to get what she wanted out of life."

The cast that season was notable for its discordant array of strong-willed personalities, including Jon Brennan, a conservative Christian country singer from Kentucky, and Dominic Griffin, a spiky-haired Irish writer who drove cross-country in an RV with Roman. ("One of the things we learned from L.A. was that we had to make sure that the roommates had enough things in common to hold them together," Murray says.)