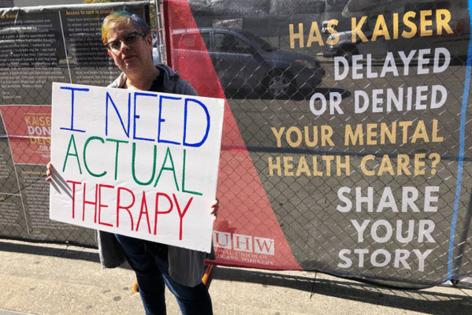 When Greta Christina fell into a deep depression five years ago, she called up her therapist in San Francisco. She’d had a great connection with the provider when she needed therapy in the past. She was delighted to learn that he was now “in network” with her insurance company, meaning she wouldn’t have to pay out-of-pocket anymore to see him.

Then, this summer, Christina was diagnosed with breast cancer. Everything related to her cancer care — her mammogram, biopsy, surgery appointments — happened promptly (like a “well-oiled machine,” she said), while her depression care stumbled along.

“It is a hot mess,” she said. “I need to be in therapy — I have cancer! And still nothing has changed.”

A new law signed by Gov. Gavin Newsom in October aims to fix this problem for Californians. Senate Bill 221, which passed the state legislature with a nearly unanimous vote, requires health insurers across the state to reduce wait times for mental health care to no more than 10 business days. Six other states — including Colorado, Maryland and Texas — have similar laws limiting wait times.

Long waits for mental health treatment are a nationwide problem, with reports of patients waiting an average of five or six weeks for care in community clinics, at Department of Veterans Affairs facilities and in private offices from Maryland to Los Angeles County. Across California, half of residents surveyed by the California Health Care Foundation in late 2019 said they had to wait too long to see a mental health care provider when they needed one.

At Kaiser Permanente, the state’s largest insurance company, 87% of therapists said weekly appointments were not available to patients who needed them, according to a 2020 survey by the National Union of Healthcare Workers, which represents KP therapists — and was the main sponsor of the California wait times legislation.

Every day, she takes multiple crisis calls from patients who have therapists assigned to them but can’t get in to see them, she said, describing the providers’ caseloads as “enormous.”