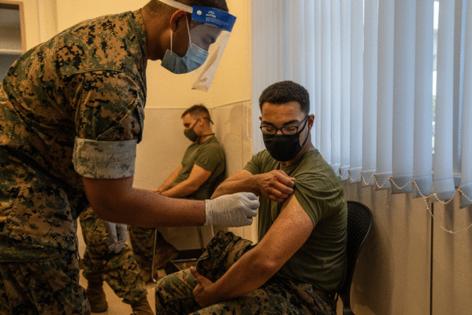 SAN DIEGO — Thousands of active-duty Marines remain unvaccinated against COVID-19 as of Monday, one day after the service's Nov. 28 deadline, the Corps said in a statement. Most of them will find themselves booted from the military if the service follows-through with its current vaccine policy.

The service did not specify how many Marines haven't received the vaccine but said 95 percent of its active-duty members have received at least one dose. The Corps lags the other military branches in vaccine compliance rate, according to data from the Pentagon.

Gen. David Berger, the commandant of the Marine Corps, thanked the military medical personnel who worked to get the majority of the force vaccinated.

"I have great appreciation for all those who made these vaccinations possible, including the civilian and Navy medical personnel who worked tirelessly over the past months to protect our Marines and families," Berger said in a statement.

Not all those who remain unvaccinated are in danger of being let go, the Corps said. More than 700 Marines were granted temporary medical and administrative waivers, according to the statement. Fourteen were granted permanent medical exemptions.

These exemptions were among the carve-outs leaders made in the military's mandate. Service members also could request waivers on religious grounds.

In a first since the coronavirus vaccine became mandatory in August, the Marines released figures on how many of its members requested those religious waivers.

Each request involved an interview with the chaplain at the Marine's unit and an endorsement by a general. The requests were then forwarded to to a three-member religious accommodation review board, health services and the service's legal office before landing on the desk of a deputy commandant for final approval.

The Marine Corps has processed 1,902 of the 2,441 religious exemption requests it received, and has approved none.

A Navy spokesperson told the Union-Tribune Monday that its religious waiver request figures will also be released this week. The Navy, which has a vaccination rate above 99 percent, also passed its deadline Sunday.

The latest administrative messages from both the Navy and Marine Corps, published in recent weeks, instructed unit commanders to begin preparing to administratively separate those members who refused to comply with the vaccine mandate. Marine commanders are to provide a list Tuesday of all non-compliant active-duty Marines to the service, according to an Oct. 23 message.

Carlos Del Toro, the secretary of the Navy, signaled last week that there might be some leniency for sailors and Marines who change their minds and comply with the mandate. A Marine spokesperson did not respond to questions Monday about how much leniency Marines can expect.

Navy and Marine Corps reservists have until Dec. 30 to be fully-vaccinated.

Neither service has released region-specific numbers on vaccine compliance rates, so no information is available on local service members. However, according to Naval Medical Center San Diego, there was no "significant spike in demand" for vaccines ahead of the deadline, suggesting a high vaccination rate locally.

As of Monday, 75 members of the military, active and reserve, have died of COVID-19, according to the Pentagon. The latest was a Navy Reserve sailor from Texas who died Wednesday, according to naval news site USNI.org.

Packed bars in San Francisco. Popular hot yoga classes in Boston. Signs are mounting that many Americans in highly vaccinated places are grasping for a near-normal life, even as the most contagious COVID-19 surge yet ...Read More

Police did not specify where they recovered the drugs, but the ...Read More

The young NYPD officer critically wounded by a gunman who killed his partner in Harlem is being transferred to another hospital as he continues to fight for his life Sunday.

Officer Wilbert Mora, 27, was scheduled to be ...Read More

Thailand is ramping up the rollout of fourth COVID-19 shots to residents in its tourism-dependent regions as the nation gears up for border reopening next month.

French President Emmanuel Macron’s approval rating has stumbled less than three months before the first round of the country’s election.

Macron’s approval rating fell to 37% in January from 41% a month earlier, ...Read More

LOS ANGELES — Four people were killed and one person was wounded in a shooting at a home in Inglewood early Sunday, in what the mayor called the worst act of violence in the city in years.