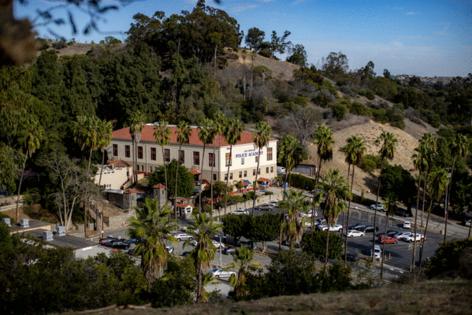 LOS ANGELES — Before it all came crashing down, Archi Duenas’ gun-stealing scheme was relatively simple, county prosecutors wrote in a memo. He just couldn’t go on vacation.

Duenas, manager of the gun store at the Los Angeles Police Academy, had been reprimanded over the years for tardiness and sloppy record keeping, but he never took time off, according to the memo. As the store’s closing supervisor, he was there each night to lock up — and hand count the inventory.

If someone else had been assigned that count, they might have discovered that dozens of guns were missing and that Duenas was stealing them and selling them for cash, prosecutors wrote in the memo. But since he was always there, the Los Angeles Police Revolver and Athletic Club was apparently none the wiser.

This went on for years, prosecutors wrote, facilitated by a lack of oversight and safety protocols that are considered standard in other gun stores.

Then, in February 2020, Duenas’ bosses told him he had accrued the “maximum allowable leave hours” and had to take time off, prosecutors wrote in the memo. When he did, another manager finally made the startling discovery: Boxes meant to have guns in them were actually empty.

The resulting investigation quickly led to Duenas’ arrest. But it also uncovered a larger scandal inside the LAPD: The clientele for Duenas’ stolen weapons included cops.

LAPD and L.A. County district attorney records and interviews by the Los Angeles Times show that what started out as a probe into Duenas has spiraled in the last year and a half, spurring a cascade of allegations of criminal activity, misconduct and corruption on the part of officers and commanders.

There are also dueling claims by some of the accused officers that they have been scapegoated by overzealous investigators despite doing nothing wrong and being victims themselves — not only of Duenas’ deception but also of years of negligence on the part of the LAPD to ensure proper management of the gun store, which it directed officers to use.

That alleged neglect, according to a pending claim against the city from one officer, came despite the fact that the LAPD was aware for years of “prior negligence and mismanagement issues related to the sale, tracking, and documentation of firearms and firearm transactions” by gun store personnel.

The case raises red flags about the LAPD’s oversight of the gun store and its ability to investigate its own officers. It also offers an eye-opening window into the gun culture within the LAPD and the degree to which LAPD officers are allegedly profiting off the sale of firearms — including “off-roster” guns that police officers have special access to despite their being declared unsafe for commercial sale in the state.