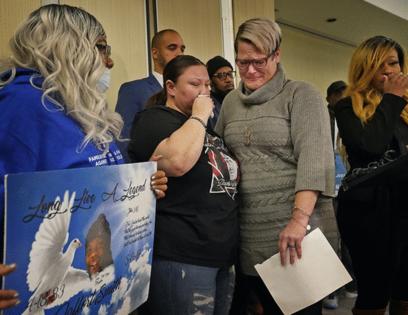 "It's just been nerve-wracking," said mother Katie Wright. "Anxiety, hurt, anger, stress... every emotion you can think of, I've been feeling it."

At a press conference in a hotel less than a mile from the Hennepin County courthouse, families who lost loved ones to police violence stood in solidarity with the Wrights, including relatives of Emmett Till, Philando Castile, Hardel Sherrell and George Floyd, whose girlfriend Courteney Ross said this case is "so dear to my heart."

Ross said she remembers Daunte Wright fondly from when she served as dean of students at Edison High School where he was a student who was a joy and always on the basketball court.

Potter fatally shot 20-year-old Wright on April 11, claiming she mistook her gun for a taser. He was killed in the middle of the trial of former Minneapolis police officer Derek Chauvin trial, who was found guilty of murdering Floyd.

Ross said the day Wright was killed, many of the families surrounding her Monday had gathered to celebrate the birthday of another man lost to police violence. Amity Dimock, whose autistic son was fatally shot by Brooklyn Center police in 2019, told Ross there had been another death at the hands of police.

"By the time I got home, I found out that man, that young man was Daunte Wright," Ross said. "Mind you Daunte's murder took place during the international trial of my man George Floyd who was murdered by Derek Chauvin. The fact that Kim Potter garnished a weapon for a routine traffic stop when the entire world was looking at racist cops under a microscope proved to me that Kim Potter was so brash and brazen that she murdered a Black man with no thought."

Potter, a 26-year veteran of the department, is heard on body camera footage immediately after the shooting saying "I'm going to prison."

Potter's attorney Paul Engh has said the video makes it abundantly clear that Potter made an innocent mistake. "An accident is not a crime," he said.